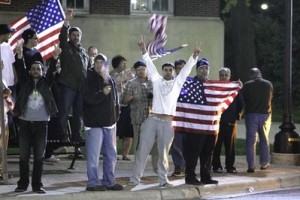 At the lunch counters in Dearborn, Michigan on Monday the talk was all about the death of Osama bin Laden.

“It’s the best thing that has happened,” said Sam Elhaf, 44, who was just leaving Joe’s Top Dog Coney Island. “Everyone is celebrating.”

Dearborn, a middle-class suburb of Detroit, has emerged as a symbol for Islam in America over the past decade as an established Lebanese-American community was joined by more recent arrivals from Iraq and elsewhere.

The city, which reported a 30 percent Arab American population in the 2000 census, includes the largest mosque in the United States as well as the headquarters of automaker Ford Motor Co. Demographic figures from the 2010 census are not yet available.

Ben Nia, 56, captured the mood of quiet relief in a city of about 100,000 with the densest Arab population in the United States.

The CIA has advertised with billboards and in newspaper advertisements in a bid to recruit Arabic speakers here. Blocks along Warren Avenue in Dearborn feature almost as many signs in Arabic as in English.

In 2006, Iraqi expatriates rallied on the same street to mark the execution of Saddam Hussein with an impromptu street party.

“We’re all excited and we’re thankful and really happy with what Obama said yesterday,” Shukr said. “When he said it’s not a war against Islam, we all cheered.”

But Majed Moughni, a 40-year-old Dearborn attorney who on the eve of September 11 last year burned an effigy of bin Laden in his backyard, said he was worried about reprisals because of the killing of the al Qaeda leader.

“It’s a double-edged sword,” Moughni said. “I am happy that he is gone, but I’m terrified of the consequences of what his people are going to do in response.”

The Council on American Islamic Relations, a Washington-based advocacy and civil liberties group, released a statement welcoming the death of bin Laden at the hands of American commandos in Pakistan, saying he “never represented Muslims or Islam.” Reuters