Can Lebanon Afford Any of its Two Major Political Groups? 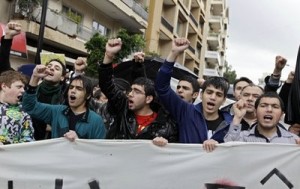 Constitutionally the die is cast in Lebanon until the next round of elections at which time the Lebanese electorate will get the chance to elect responsible representatives that pledge allegiance to an idea   , to citizenship and to the welfare of a sovereign, independent and free Lebanon. The above does not mean that the competition must be limited to the two groups; March 14 and March 8; that have dominated Lebanese politics for the past six years. Both have demonstrated their incompetence and the relative bankruptcy of their respective positions.  One group, March 8, is often considered to be nothing more than an extension of the Iranian Republican guards and the savage and brutal Syrian dictatorship while the other; March 14; is busy satisfying the whims of Saudi Arabia another dictatorship in the Arab world.

The creation of a viable democratic state based on institutions, respect for the rule of law and the principles of social justice demands that both of the above camps be rejected by the electorate in favour of young, educated, and non tribal secularists. That is the only chance for Lebanon to liberate its citizens and establish an oasis of freedom and liberty in an ocean of repression and political backwardness known as the Arab world.

We have often described the incongruity of the positions that Hezbollah and its allies seem to support but that ,rather strong criticism , should not be misinterpreted as being unqualified support for March 14 whose leadership has been clueless, incompetent, feudalistic and sectarian. Maybe March 14 has demonstrated that it is less “backward” than the other camp but that is not a badge of honour. Our choices do not have to be either an autocratic theocracy or an incompetent tribal and sectarian governance. There is a third way, a truly democratic way committed to transparency, liberty, freedom and democracy.

March 14 has missed one opportunity after another to establish a truly national and diverse political party based on ideas and accountability. Not only that  but they have also failed to stand up to March 8 over and over again. They ended up , each time,  offering one appeasement after another until March 8 was able to form a democratic coup and throw them out of office. Now that they have nothing to lose, they have found religion. March 14 is apparently willing to take the tough decisions and confront the forces of evil as exemplified by March 8. That is not acceptable since such a position is neither genuine nor effective. It is simply a reaction to a loss of power and a tactic to regain control.

Sa’ad Hariri is a novice whose sole interest is to appear with pictures of his dad in the background, Mr. Saniora never has never confronted a Hezbollah idea than he did not like, Gemayel and Geagea continue to be the consummate sectarian Christians who want to peddle their Kool Aid that all Lebanese are equal but Christians are more equal than others. Unfortunately the Maronite church as represented by its Patriarchs, the old and the current, has offered encouragement and failed to see that the only thing that is worthwhile is to follow a policy that favours the welfare of Lebanon as a whole and not merely the well being of its Christians.

One should also add, at this, point that it is the combined failed policies of both of these camps that are making the probability of a “Black Swan of Beirut” more and more inevitable. The Lebanese economy must, at a minimum, enjoy a growth rate that is larger than the interest rate paid on its sovereign debt. As we have argued many times last year, that is a theoretical possibility but very highly unlikely to occur since such an eventuality is based on everything breaking the Lebanese governments’ way , something that is not likely to happen, in a world of increasing scarcities , economic imbalances and being a situated in a very tough neighbourhood.. March 14 was responsible for accumulating the sovereign debt and for dollarizing a huge part of it while March 8 uses its influence to generate one financial and economic crisis after the next, the last being their economically and environmentally disastrous call for eliminating fuel taxes. Both parties do not have the courage to level up with the Lebanese tax payer and ask for a prolonged period of austerity combined with debt restructuring.

Yes, many continue to argue that March 14, with all its faults, is the best alternative given the political, social and economic mayhem that March 8 policies promote. But that position is false and questionable. To pretend that these are our only choices is wrong especially when we can reject both  in order to create a modern accountable society.