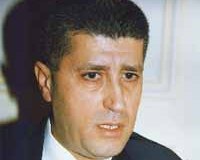 His comment comes after Wahhab’s press office issued the following statement on Friday:”We’ve found out that the checks we have recently published had been forged by the person who provided them to us , so we apologize to the people whose names appeared on the fake checks.”

Beydoun condemned Wahab’s announcement last Saturday , describing it as a “cheap game by the Syrian intelligence.”