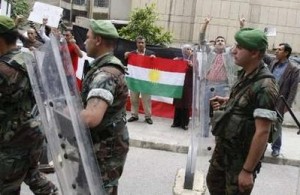 Around thirty activists from Lebanon and Syria on Friday night rallied in Beirut’s Hamra Street in support of protestors in Syria.

A group of pro-Syrian regime protestors also rallied to the site and held up pictures of Syrian President Bashar al-Assad.

Photo; Lebanese soldiers stand guard as Syrian Kurds living in Lebanon chant slogans and carry banners and a Kurdish flag during a protest in solidarity with anti-government protesters in Syria, in front of the Syrian embassy in Beirut, April 29, 2011.