Bomb Kills At Least 14 in Morocco 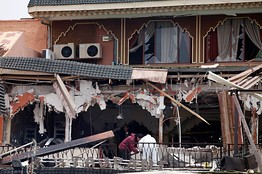 A massive bombing tore through a tourist cafe in the bustling heart of Marrakech’s old quarter Thursday, killing at least 11 foreigners and three Moroccans in the country’s deadliest attack in eight years.

At least 23 people were wounded in the blast a few minutes before noon in Djemma el-Fna square, one of the top attractions in a country that depends heavily on tourism, Moroccan Interior Minister Taib Chergaoui said.

Government spokesman Khalid Naciri said it was too soon to lay blame for what he called a terrorist attack but he noted that Morocco regularly dismantles cells linked to al Qaeda in the Islamic Maghreb and says it has disrupted several plots.

April marks the start of Morocco’s tourist season, when visitors gather to watch snake charmers, storytellers, jugglers and local musicians, filling the cafes that ring the edges of the iconic square on the route to the city’s major open-air souk, or market.

“There was a huge bang, and lots of smoke went up. There was debris raining down from the sky,” honeymooner Andy Birnie, who lives in north London, said. “Hundreds of people were running in panic.”

The explosion blew much of the facade off the two-story Argana cafe, leaving awnings dangling. Panicked passersby dragged away bodies and tried to put out flames with fire extinguishers, witnesses said.

U.K. Foreign Secretary William Hague said the British ambassador was travelling to Marrakech, although he gave no immediate confirmation of British casualties.

This former French colony has enjoyed relative stability and political plurality compared to some of its neighbors, but King Mohamed VI holds the final say in all policy, and the country’s largest Islamist movement is banned from politics.

The king has pledged constitutional reforms in response to several largely peaceful protests over the past two months that were inspired by popular uprisings that pushed out autocrats in nearby Tunisia and Egypt.

Germany, which said none of its citizens had been hit, urged that the attack “must not lead to the reform process that has been initiated in Morocco being undermined.”

Al Qaeda’s affiliate in North Africa stages regular attacks and kidnappings in neighboring Algeria. Al Qaeda in the Islamic Maghreb is holding four Frenchmen hostage after kidnapping them in Niger last year, and recently released new images and audio recordings of their voices.

Morocco, however, has been mostly peaceful since it was hit by five simultaneous terrorist bombings in Casablanca in 2003 that killed 33 people and a dozen bombers linked to the Moroccan Islamic Combatant Group, a local militant group also been implicated in the deadly transit attacks in Madrid in March 2004.

In April 2007, two suicide bombers died in attacks by the U.S. consulate in Casablanca, the economic capital.

Moroccan authorities have rounded up thousands of purported terror suspects in recent years and while they “regularly discover terrorist cells … nothing led us to foresee an act of this magnitude,” Mr. Naciri said.

“Morocco has an international image of welcome, hospitality and tourism,” he said “An act of this magnitude will leave its mark.” WSJ