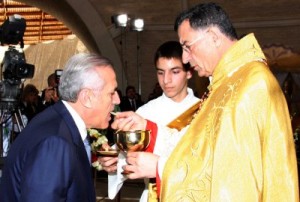 Lebanese President Michel Suleiman denied on Sunday that foreign obstacles were behind the delay of the cabinet formation process, saying the impasse was due to local “demands.”

“There are no foreign obstacles ,” Suleiman told reporters in Bkirki after meeting with Maronite Patriarch Beshara al-Rahi. The impasse is due to the “demands of Lebanese parliamentary blocs” and “not obstacles,” he said.

He stressed the importance of relying on dialogue and the constitution in solving cabinet formation problems.

Suleiman made his remark before attending Easter mass in Bkirki.

Aoun has been attacking president Suleiman ever since PM Designate Nagib Mikati has been trying to form the cabinet .

Mikati has not yet been able to form a cabinet . Aoun’s demand that he should receive a blocking third of cabinet seats, including the Interior Ministry , currently part of President Suleiman’s cabinet share has reportedly been the main reason behind the delay in cabinet formation.

Asked about the protests against the regime in Syria, the president said that he was in continued contact with his Syrian counterpart, Bashar Assad, and stressed that Lebanon backs the neighboring country’s stability and supports reforms announced by the Syrian leadership.

Syrian President Bashar al-Assad has been facing the biggest challenge to his rule. Popular protests demanding greater freedoms and an end to corruption erupted over a month ago in southern Syria and spread to the capital Damascus and most cities in Syria.

About the meeting held between the rival Maronite leaders in Bkirki last Tuesday, Suleiman said the talks were the result of the “partnership and love” slogan announced by Patriarch Rai after his election.

He stressed on the importance of following up on the talks and said: “Political rhetoric should enjoy a high level of responsibility.”

On Saturday, Suleiman extended his greetings to the Lebanese hoping for the “real resurrection of Lebanon.”

He said in a statement released by his press office that he hoped for the “real resurrection of Lebanon the state that protects all its citizens and unifies them under the slogan of love, justice and law.”