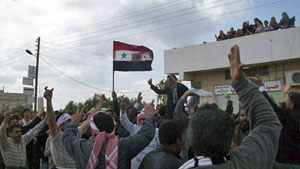 The federal government is advising Canadians to leave Syria after security forces there killed at least 11 mourners taking part in funeral processions Saturday for protesters slain during anti-government demonstrations.

Reports of the killings, including in the southern town of Izraa and the Damascus suburb of Douma, could not be independently confirmed because Syria has expelled foreign journalists.

Ammar Qurabi, the head of Syria’s National Organization for Human Rights, confirmed at least 11 dead on Saturday. A total of 112 were killed Friday — considered the deadliest day of the uprising, with security forces beating back protesters with bullets, tear gas and stun guns.

The violence and the likelihood that more protests may occur prompted Canada’s Foreign Affairs Department to advise Canadians against travel to the country and Canadians living in Syria to leave by commercial means while they’re still available. The department said those requiring emergency assistance should contact the Canadian Embassy in Damascus.

Over the last five weeks, funerals of demonstrators have often turned into anti-government protests. During Saturday’s procession in Izraa, thousands of people were shouting slogans against President Bashar Assad’s regime as they carried coffins through the streets.

Also Saturday, two members of parliament and a religious leader resigned to protest the killing of demonstrators during the uprising against Assad.

The two legislators, Nasser Hariri and Khalil Rifai, are from Daraa, a southern region that unleashed the protest movement in mid-March. Activists in touch with the politicians confirmed the resignations.

In addition, Sheikh Rizq Abdul-Rahim Abazeid stepped down from his post as the mufti of Daraa. “I cannot tolerate the blood of our innocent sons and children being shed,” he said.

Each Friday, growing numbers of people in cities across the country have taken to the streets despite swift attacks from security forces.

The heavy security crackdown on Friday and Saturday came after Assad warned a week ago that any further unrest would be considered “sabotage” after he made the gesture of lifting a decades-old state of emergency, which had given security forces almost blanket powers for surveillance and arrest.

With foreign journalists unable to get into Syria and others prevented from gaining access to trouble spots, much of the reporting in the country has depended on video phone footage distributed by opposition activists.

Syrian human rights groups have called on the government to set up a judicial investigation committee to prosecute those who shot at protesters and release all political detainees.

Some 300 people have been killed since the uprising began last month.

Several world leaders have condemned the crackdown on protesters.

“This outrageous use of violence to quell protests must come to an end now,” U.S. President Barack Obama said Friday.

Jerzy Buzek, president of the European Parliament, urged the Syrian government to stop the “bloodshed,” allow media freedoms and release “all prisoners of conscience.”

Photo: Syrian anti-government protesters hold up a bloodied national flag during Saturday’s funeral procession for slain activists in Izraa. This image was captured on a mobile phone and sent to AP.