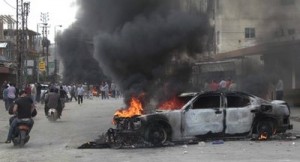 Amal Movement MP Ayoub Hmayed said on Saturday during the funeral of Ali Nasser who died in a clash over the illegal construction of houses in Tyre that “chaos on all levels is the result of the current political paralysis.” National News Agency reported.

Hmayed reportedly voiced his disappointment over the “innocent blood shed” during the incident .

The report added that Hmayed called for speeding up the cabinet formation process to address citizens’ affairs.

Two civilians were shot dead and two others wounded Thursday by police gunfire in a clash over the illegal construction of houses on public property in the southern port city of Tyre.

Lebanon has been run by a caretaker government since last January. Nagib Mikati was appointed in January as the PM designate with the backing of the Hezbollah led-March 8 alliance, MPs Walid Jumblatt and Mohammad Safadi . March 14 leaders have repeatedly said that intimidation from Hezbollah’s weapons helped secure the parliamentary majority for Mikati’s nomination

Mikati until now he has not been able to form a cabinet. MP Michel Aoun’s demand that he should receive a blocking third of cabinet seats, including the Interior Ministry , currently part of President Michel Suleiman’s cabinet share has reportedly been the main reason behind the delay in cabinet formation.

One analyst told Ya Libnan: “The Hezbollah-led March 8 alliance is acting like ‘Ali Baba and the forty thieves’ and wondered how can a coalition of this sort govern the country if it can’t even form a cabinet .”

Photo: A police car burns after residents set it on fire in near the southern port city of Tyre, Lebanon, Thursday, April 21, 2011.