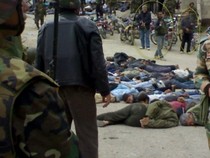 Syrian security and intelligence services have arbitrarily detained hundreds of protesters across the country, subjecting them to torture and ill-treatment, since anti-government demonstrations began in mid-March 2011, according to a human rights organization. Yesterday, thousands of anti-government protesters occupied the center of Syria’s third largest city, Homs, insisting they will not leave until they bring down the country’s leadership.

Earlier, funerals were held for some of those killed in Sunday’s violence in the city, with crowds calling for the end of Assad’s Ba’ath Party regime.

At least eight civilian were killed in Homs on Sunday after Assad’s soldiers fired on crowds protesting the death of a tribal leader while in government custody.

The protesters says the occupation of the city center will continue until their demands are met. The protesters’ demands include the immediate end of the military’s enforcement of Syria’s longstanding emergency laws and the release of political prisoners. The security and intelligence services, commonly referred to as mukhabarat, have also arrested lawyers, activists, and journalists who endorsed or promoted the protests.

“Syrian authorities should immediately stop the use of torture and free arbitrarily detained demonstrators, activists, and journalists,” Human Rights Watch said in a press statement. “The government of President Bashar al-Asad should order prompt and impartial investigations into serious abuses against detainees and ensure all those responsible are brought to justice.”

“There can be no real reforms in Syria while security forces abuse people with impunity,” said Joe Stork, deputy Middle East director at Human Rights Watch. “President al-Asad needs to rein in his security services and hold them to account for arbitrary arrests and torture.”

Most detainees interviewed by Human Rights Watch reported being forced to sign confessions without being allowed to read them, as well as pledges not to participate in future protests. Some also had to provide detailed personal information about themselves and their families, including family members’ addresses and places of employment. None were allowed to have any contact with relatives or lawyers while in detention, and their families were not informed of their whereabouts.

Most of those detained following protests told Human Rights Watch that they were forced to sign and put their fingerprints on papers without being allowed to read the document. A teenager from Douma detained for two days by the mukhabarat — he was blindfolded and so did not know which security branch — told Human Rights Watch: I asked, “What is this paper?” and one of the security men grabbed my head, and pushed my mouth open, and the other one squeezed my tongue with something that felt like pliers and started pulling it. And when I refused to sign it, one of the interrogators took a hammer and started pounding on my toes. In the cell, they also beat me on the face with their Kalashnikovs [AK-47 assault rifles].

Another detainee, a non-Syrian Arab, told Human Rights Watch that he signed and put his fingerprints on a piece of paper after each day of interrogation: “I never saw what I signed,” he said. “My eyes were blindfolded. And I was afraid so I did not even dare ask read it.” A Western detainee recalled that the security services made him sign two pieces of paper but would not let him read them.

Syria’s security services have also arbitrarily arrested and tortured activists, writers, and journalists who have reported on or expressed support for the anti-government protests, detaining at least seven local and international journalists since protests began on March 16.

A Syrian writer described how security services “kidnapped” him off the street in Damascus after he spoke about Syrian protests and the government response in the media. “I saw a white unmarked van on the street, and when I came directly beside it, the sliding door opened and three big men grabbed me,” he told Human Rights Watch. “They did not say anything to me, just grabbed me.” On the way to what he later learned was a State Security building, his captors beat and kicked him. During interrogation they also beat him: “They brought a whip and started to beat my shoulders, legs and arms. They were cursing me and accusing me of things.”

A non-Syrian Arab journalist told Human Rights Watch that he was beaten during interrogation.

State Security also arrested one of the lawyers who represented the protesters detained at the March 16 demonstration calling for the release of political activists. He spent a week at the State Security detention facility in Damascus, where the security personnel on several occasions beat, threatened, and humiliated him. He spent most of his time handcuffed and hooded. Before being transferred into a cell, he was held for four days in an unheated corridor, apparently because the cells were jammed. The lawyer said that throughout his detention he heard sounds of beatings and screams of other detainees.

All former detainees interviewed by Human Rights Watch described appalling detention conditions, with grossly overcrowded cells where at times detainees could only sleep in turns and suffered various forms of humiliation and verbal abuse. One person detained at State Security in Damascus said he shared a 30-square meter cell with about 75 other people.