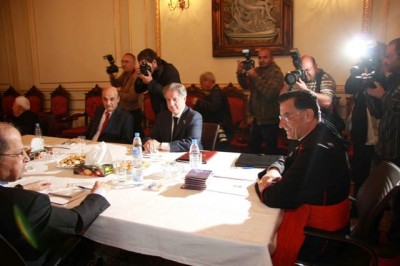 As anticipated a meeting was held between the country’s top Christian officials in Bkirki on Tuesday . The meeting was described as “brotherly and patriotic par excellence,” according to  a statement released by the patriarchate after the talks.

“The meeting was brotherly and patriotic above all. An atmosphere of love and brotherhood prevailed,” the statement said.

Yes there was a handshake !

There may be other such meetings in the future, the statement added without specifying any dates.

The statement stressed the need to preserve the country’s unity and basic interests.

The meeting was chaired by Maronite Patriarch Beshara Boutros al-Rai and addressed the general situation in the country, according to the statement

The talks were held away from the media spotlight. Journalists and reporters were prevented from entering the patriarchate’s premises when the officials arrived in the morning.

The talks were followed by a lunch banquet hosted  by the patriarch in the honor of his guests. Former Maronite Patriarch Nasrallah Sfeir was also present at the luncheon.

During the weekend the newly elected Patriarch said that the meeting will be spiritual and will not discuss political issues . An Nahar newspaper reported Tuesday that discussions would focus on general issues, and mainly Christian issues such as rejection to naturalize Palestinians, the voting of expatriates, decentralization, the election laws, corruption and the Christian presence in state institutions.

Geagea said on Monday that he wouldn’t hesitate to shake hands with his foes Aoun and Franjieh. The LF leader made good on his promises and shook hands with the two men ahead of Tuesday’s meeting.

“We shook hands and talked too,” Franjieh confirmed to reporters after the meeting.

Aoun told reporters that each two persons disagreeing with each other were seated facing each other. 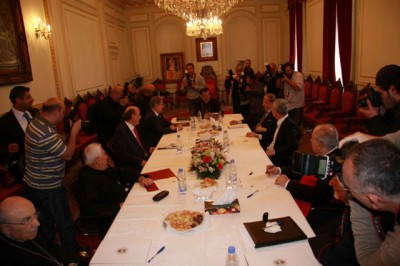 Journalists were later allowed to go in to take photos of the conferees. Television footage showed them sitting at a rectangular table chaired by al-Rahi. Aoun, Franjieh, and Bishops Boulos Matar and Samir Mazloum set on one side. While Gemayel, Geagea, and Bishops Roland Abou Jaoudeh and Youssef Beshara at the other.