Thousands rally at funeral in Syria 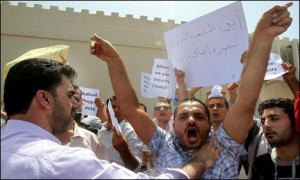 Thousands of Syrians on Saturday attended the funeral of a man who succumbed to his wounds after being shot in the northwestern city of Banias, witnesses and activists said.

The mourners chanted slogans in favor of greater freedoms, against the ruling Baath party, in power since 1963, while some also called for an end to the regime, the sources told AFP.

Osama Al-Shikha, 40, was shot on April 10 when, according to witnesses, seven cars “carrying people sent by the regime arrived in front of the Abu Bakr al-Sidiq mosque and their occupants opened fire” during dawn prayers.

“Five people were wounded,” a witness told AFP at the time, adding that “the people behind this shooting are regime thugs and their names are known to us.” the news