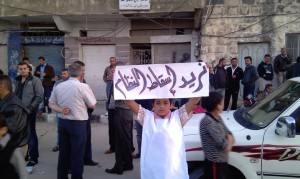 Thousands of people marched in the southern Syrian city of Deraa on Saturday chanting “the people want the overthrow of the regime,” two witnesses said, ahead of a televised speech by Syrian President Bashar al-Assad.

The demonstrators marched from the ancient Omari mosque in the old quarter of the city toward the main Saraya square in downtown, with scores carrying posters of those killed in weeks of pro-democracy protests, the witnesses told Reuters by phone from the border city with Jordan. Reuters