Assad admitted that there were faults in his government 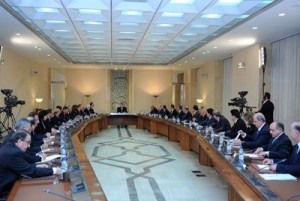 Syrian President Bashar al-Assad said Saturday legislation to lift 48 years of emergency law would be enacted by next week but warned that new laws in the works would not be lenient toward what he called sabotage.

In a speech to a new cabinet he named last week, Assad said stability remained his priority but said that reform was needed to “strengthen the internal front,” following unprecedented protests against his authoritarian rule.

Assad admitted that there were faults in his government, but stressed the reforms could not happen immediately and would be only hindered without popular support.

He said that the current situation has caused a lot of pain in the soul of each and every citizen for those who have been martyred.

“The blood that was shed in Syria hurt every Syrian, and we are sad for every person we lost and for every person that was wounded. We consider them all to be martyrs, whether they were civilians, police officers or army soldiers. ”

Assad acknowledged Syria’s serious economic troubles. “There is no doubt that unemployment remains the biggest problem in the country,” he said. “Of course the improvement of the economy will create more jobs, but this will take a long time to develop.”

Touching upon the inflammatory issue of Syria’s Kurdish sector, he stated with minimal specifics that he was in favor of granting Syrian citizenship to that portion of the population and stressed that this should enhance national unity. he urged the cabinet to finalize the naturalization law.

He also stressed the need for better communication between the government and its citizens. “We have to open up new channels between us and the people,” he said. “This trust of the people cannot come without complete transparency.”

“When we are transparent with the citizens and tell them what their rights and duties are, then we can build trust. We should reach a united vision between the institutions and the people.” He stressed that the government should focus on the channels of communication with the citizens. Results will not be satisfactory if there is no communication .” He said

“Our hopes are as great as those of the rest of the Syrian citizens, and we know how great the challenges we are facing are. I noticed during the meeting that there is a gap between state institutions and citizens. It is important to eliminate this gap and fill it with the faith of the citizens in their state.

He stressed the importance of focusing on the unions and to communicate with them and making them part of the decision making process.

“The people’s need for state services, security and dignity are all linked.” He said

Addressing the issue of electoral laws he said :

“We started to study the municipal] electoral law in the past year, and any amendment to this law without first changing its mechanism makes no sense.”

Addressing the shortcomings of the media in Syria he said:

“A new modern media law… is being studied and this cabinet can continue to study this issue within a time frame.”

Commenting on the demands of the Syrian youth he said :

“The citizen wants justice, development, health and education, but unemployment is the major issue that we are facing amid the large number of out-of-work Syrian youth. The youth that faces blocked horizons will become desperate. This is not only an economic challenge, but a national one related to Syria’s stability. We should start projects to deal with unemployment quickly.

Commenting on the demands of the rural areas he said:

“We should take care of rural areas. A farmer cannot continue without being provided other services, such as education, medicine and others. We should not forget agriculture, which is the basis of the Syrian economy. ”

Commenting on the public sector he said:

“We should develop the public sector too. This sector is a source of income for the treasury and a safeguard for stability in Syria.”

“This reform package increases participation by increasing freedoms, but there are conditions for making this reform succeed, which can only be achieved through state institutions. ”

“Any reform should be based on stability and domestic security. This reform secures the nation and enables us to face challenges. I trust the Syrian people.” He added

“If we succeeded then this would be a historic reply to those who wrote that this region cannot make reforms.” He told the cabinet