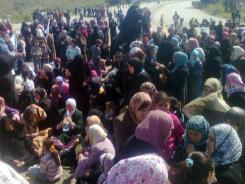 Women, children and students took to the streets in Syria on Wednesday, lending their voices to a monthlong uprising that President Bashar Assad insists is the work of a foreign conspiracy.

The protest movement is posing an increasing threat to Assad’s iron rule as it attracts an ever-wider following, with tens of thousands of people demanding political freedoms and an end to the decades-old emergency laws that extend state authority into nearly all aspects of Syrians’ lives.

“We will not be humiliated!” shouted some 2,000 women and children who blocked a main coastal road in northeastern Syria, where security forces and pro-government gunmen have cracked down on dissent in recent days. The protesters were demanding the release of hundreds of men who have been rounded up in the villages of Bayda and Beit Jnad.

“Yesterday they raided our home in Bayda and took away my father,” said one of the protesters, a 21-year-old woman. “I’m not leaving here until they return him to us.”

In an apparent attempt to calm the women’s demonstration, authorities released about 100 of the detainees and paraded them in front of the protesters, prompting cheers and cries of triumph, a witness said. Some of the men were bruised and appeared to have broken bones, witnesses said.

Residents and activists said hundreds of men, young and old, were arrested Tuesday when security forces and pro-government gunmen attacked the villages in northeastern Syria in a move to crush growing dissent there.

Another protest was reported Wednesday outside the state-run news agency’s offices in the capital.

Details coming out of Syria are sketchy because the government has placed severe restrictions on the media, limited access to trouble spots and expelled reporters, including journalists from The Associated Press.

But witness accounts suggest an expansion of the protests, with a broader cross-section of society joining in.

“These developments are very significant because they underline a number of elements which have propelled the revolutions that we have witnessed in Tunisia and Egypt,” said Anthony Skinner, an analyst at Maplecroft, a risk analysis company.

“The youth tend to be hands-on, dynamic and willing to take risk,” said Skinner, whose specialty includes Syria. “This all puts increased pressure on the regime.”

Syria’s state-run news agency acknowledged the student protests for the first time, but said only about 50 students staged protests at Damascus University and in the Aleppo campus. It said other students chanted national slogans that reject chaos and attempts to destabilize Syria.

Assad blames the violence on a foreign conspiracy and armed gangs rather than true reform-seekers. But he also has made overtures to try to ease growing outrage — including dismissing his Cabinet, firing local officials and granting Syrian nationality to thousands of Kurds, a long-ostracized minority.

The gestures have failed to satisfy protesters who are demanding political freedoms and an end to the decades-old emergency laws that give the regime a free hand to arrest people without charge.

Assad has made a point of announcing his limited reforms on Thursdays in an effort to reduce tensions ahead of mass protests planned for every Friday after Muslim prayers. Assad has also been meeting with delegations from areas that saw major protests, including Daraa and Douma, listening to their grievances and promising changes.

But his strategy is not working — indeed, the protests have only grown stronger.

“With this approach, Assad may succeed in stopping or decreasing the protests for a while, but this will only delay another explosion,” said Ayman Abdul-Nour, a pro-reform former member of Assad’s ruling Baath Party who now lives in exile.

The government also has taken pains to countering accounts by witnesses and human rights activists, saying thugs rather than security forces were responsible for the violence.

The Syrian government denied a Human Rights Watch charge that Syrian forces prevented ambulances from reaching the wounded Friday — the single bloodiest day of the uprising — in the southern town of Daraa and in Harasta, near Damascus. Thirty-seven people were killed nationwide Friday.

An Interior Ministry statement said unidentified gunmen shot at people and prevented ambulances from transporting the wounded to hospitals.

State-run television aired what it said were confessions by three members of a “terrorist cell” Wednesday, saying they received money and weapons from a Lebanese lawmaker to instigate protests in Syria and create chaos across the country.

The lawmaker, Jamal Jarrah, laughed off the Syrian-aired confessions and denied any involvement. USA today