In Lebanon, a More Patient Protest

As thousands of Lebanese joined in weekly protest marches in the past month, their shouts rang familiar, mirroring those heard across the Arab world in the recent uprisings: the people want to overthrow the regime.

Inspired by the wave of revolt in Egypt, Tunisia, Libya and other Arab countries, some in Lebanon have begun their own rebellion.

But while their chant may be the same as in the other countries, their target is different.

In Lebanon there is no single dictator to confront. Rather, protesters are challenging the powerfully entrenched fiefs of sectarian politics.

“We tend to think of them as one entity, as one system, one regime,” said Imad Bazzi, a blogger and activist who is taking part in the protests. “They have an interest in controlling us, in controlling the country.”

The task ahead of the anti-sectarianists is not an easy one.

A 1943 agreement reached at the outset of the country’s independence determined that the president should be a Maronite Christian, the prime minister a Sunni and the speaker of Parliament a Shia. President Michel Suleiman, speaker Nabih Berri, and the caretaker Prime Minister Saad Hariri fit the pattern.

The agreement was an attempt to balance power between Lebanon’s 18 officially recognized religious sects. 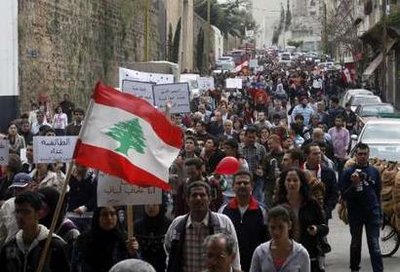 In most Beirut neighborhoods today, the signs of sectarian political parties are easily seen — from stencils of the stylized cross logo of the Christian Lebanese Forces party in the eastern half of the city to portraits of Hezbollah’s leader, Hassan Nasrallah, in the city’s southern suburbs.

While the movement’s first protest on Feb. 27 brought out only several hundred protesters, subsequent weekly marches have attracted thousands to the streets in Beirut and other Lebanese cities.

Still, the number of protesters at most anti-sectarianism marches has paled in comparison to the large crowds that sectarian political parties can mobilize at their rallies.

On Sunday, demonstrators marched from the National Museum toward Parliament.

Trucks and vans with mounted speakers repeatedly played a song by the Lebanese rapper Rayess Bek that combines popular chants of the movement with a list of demands: a lower cost of living, more jobs, social security — and a secular state.

“If we introduce some economic and social demands we can gain some people,” said Faisal Sfeir, a 23-year-old who was taking part in the march on Sunday.

The protesters have faced hurdles.

In March, Mr. Berri, the speaker of Parliament who leads the Shia party Amal, urged his supporters to join the anti-sectarianism movement.

Activists, who say Mr. Berri’s party is part of the sectarian system against which they are fighting, have accused him of attempting to hijack their movement and rejected his support.

With most local news media outlets owned directly by politicians and their parties, protesters have also complained of a lack of media coverage.

Recent rallies have also been marred by instances of infighting — occasionally physical — as the movement has struggled to consolidate its direction.

Still, “if we are serious, we can succeed,” Mr. Sfeir said.

In contrast with other movements in the region, many of those campaigning against sectarianism in Lebanon are not trying to induce immediate change.

“We can’t change such an old system in two or three months,” said Bilal Jaber, a 24-year-old protest organizer.

Mr. Jaber said that he was looking to achieve results in 5 to 10 years. Mr. Bazzi, the blogger, said the realization of a secular state could take even longer.

“If we take down the regime now, we are going to suffer,” he said. “ Why? Because we don’t have an alternative.”

For now, the demonstrators’ goal is more about beginning a dialogue about a secular state, a debate that has been largely absent until now.

On Sunday, protesters urged onlookers to leave their balconies and join their march.

While many responded with befuddled looks, some bystanders eventually chatted with the marchers on the side of the road, asking what exactly their movement was all about.