Mideast uprisings show the power of the weak 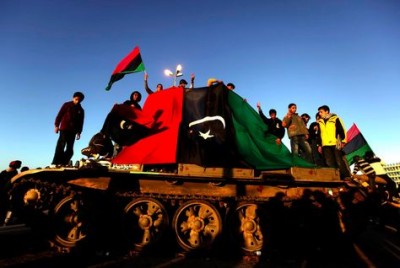 The weak have a new power in the modern media age: Their suffering is visible to millions of well-intentioned people around the world who are likely to support humanitarian intervention to rescue them from their plight.

But there’s a dangerous corollary to this new power of the weak: It can lead disorganized groups to start fights with established authorities that they can’t finish — unless they are rescued by larger powers. In this sense, the media attention emboldens the very actions that can lead to slaughter and repression.

This paradoxical power of the weak is obvious today in Libya, where a ragtag, barely organized group of rebels challenged the entrenched power of the dictator, Moammar Gaddafi. The world (or at least, the portion of it that watches cable television) quickly rallied to the rebels’ cause. Their very helplessness was part of their attraction.

The impulse to help the embattled Libyan rebels preceded any serious analysis of their leadership and intentions. The images of their plight also trumped an assessment of whether the rebels could win, or how they would govern if, somehow, they did succeed. Reversing the normal order of priorities, Western intelligence agencies are struggling to assess who these people are, after the United Nations, the Arab League and NATO have decided to help them.

It may seem heartless to question the logic of humanitarian intervention, especially in the moment when disaster seems imminent. But it’s useful to have some benchmarks — and to understand the subtle reverse leverage that is at work here. Otherwise, policy will inevitably be driven by the images of defenseless people who have taken up arms against the evil regime.

I first saw the power of the weak in action in Lebanon during the early 1980s. Despite overwhelmingly superior firepower, the Israelis were unable to drive the Palestine Liberation Organization from Beirut in 1982. A major reason was that the conflict was televised. To pry the Palestinians loose, the Israelis would have had to use a level of force and physical intimidation that would have horrified the world.

The Israelis’ problem, as I wrote at the time, was that their media wires got crossed: The Palestinians watching concluded that the Israelis, despite their modern army, were less threatening than they appeared. The rest of the world concluded that with their overwhelming firepower, the Israelis were bullies. That problem of mixed messaging has persisted for Israel ever since.

Lebanese militias also used the power of the weak: The Christian militia known as the Phalange started a civil war in 1975 that it couldn’t win, expecting that France and other former colonial powers (plus the United States) would come to its rescue. In the end it was Syria that led a so-called Arab Deterrent Force to maintain the status quo, and the civil war ground on for another 15 years.

The power of the weak was demonstrated by the Muslims of Bosnia, who declared independence from the Serbian-led Yugoslavia in 1992, despite overwhelming Serbian military power. Their cause was appealing (as was that of the Lebanese Christians, the Palestinians and, more recently, the Libyans). The problem was that they couldn’t win on their own. So the world watched heart-rending images of the destruction of Sarajevo; it was the gruesome massacre at Srebrenica in July 1995 that finally brought decisive international intervention to stop the war.

Weakness was strength, too, for Kosovo in its 1999 campaign for independence from Serbia. The plucky Kosovars were lucky, too, in battling an unpopular foe, Serbian dictator Slobodan Milosevic. The Kosovars would have been savaged had they continued to fight on their own. But NATO intervened with a three-month bombing campaign to support the breakaway province, and Milosevic capitulated in June 1999.

Back to Libya: The more we know about the chaotic rebel movement there, the less attractive an outright rebel victory seems. A better Libya is probably one where Gaddafi is replaced by a coalition government that includes both the rebels and “reconcilable” figures from the old regime who have broken from the dictator. Could this outcome have been achieved without military intervention? That’s a question worth pondering.

Here’s the troubling conclusion: If you want to maintain a dictatorial regime, break the opposition in private torture chambers, not on the streets. Intimidate or block media coverage; police the Internet to prevent dissemination of images that will shock the conscience of the world. That’s a cynical strategy, but it seems to work. Just look at Iran. WP