A blogger was jailed recently for “insulting the military.” Human rights advocates say that thousands of people have been arrested and tried before military courts in the last two months. Protesters have been tortured and female activists subjected to so-called virginity tests. 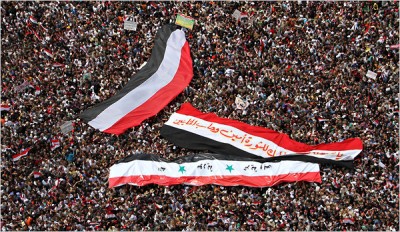 Fed up and angry with Egypt’s military rulers, tens of thousands of demonstrators turned out on Friday in Tahrir Square here for one of the largest demonstrations since the former president, Hosni Mubarak, stepped down on Feb. 11. The protest was being called the “Friday of Warning.”

Since the military assumed direct control after Mr. Mubarak was forced from power, it has seen its standing as defender of the revolution called into question by actions that reflect the authoritarian tactics of the past rather than a blueprint for a democratic future, many here said.

“We don’t want a confrontation with the army but they have to understand that the people will not go quiet,” said Nevine Bakir, 42, as she entered the square. “This is a revolution.”

The military’s critics say that it is either unwilling or incapable of ushering in an era of true democratic reform, an end to corruption and the abolition of abusive police practices.

“The army and the people are not one hand,” the blogger, Michael Nabil, who is now facing a secret trial and a three-year prison sentence wrote in a posting. “The revolution has so far managed to get rid of the dictator, but the dictatorship still exists.”

But for all the shock, even despair, expressed by many Egyptians over the military’s actions, those who have served in and studied the military said they had not been surprised, given the military’s leadership and the responsibilities it has been asked to accept, which far exceed its traditional duties and current capabilities.

A military spokesman said that many of the charges were based on rumor, and that the military would investigate the accusations of abuse against women. He added that the military was dedicated to “moving Egypt step by step toward democracy and that it was responding to the interest of the people.”

However, about the best even the military’s supporters can say for its halting moves toward democracy, its efforts to protect the network of Mubarak-era officials and allies and its tolerance of the continuing practice of torturing prisoners, is that the generals are uncomfortable with their new role and slowly learning how to navigate the shoals of civilian life.

“They are well versed and knowledgeable individuals, but they were not prepared for what they are doing right now,” said Nabil Fouad, a retired general and professor of strategic studies. “The army was suddenly handed this mission, and it was complicated even more by the absence of the police.”

Demonstrators who gathered in Tahrir Square on Friday in one of the largest demonstrations in recent weeks, seemed to share the view of Mr. Nabil, the blogger, however, quite a change from the early days when the military was embraced by the crowds in the square.

“My opinion is that the military council is a supporter of the old regime,” said Sayyid Hozayen, 51, a businessman who attended the rally. “They were a part of it, so they are defending it in every way they can.”

The focus of the attention is a small council of military leaders unaccustomed to public accountability, let alone having their decisions questioned. The Supreme Council of the Armed Forces, which is collectively serving in the role of the president — with final power over every decision — has provided little insight into its deliberations or an explanation of its decision-making process.

“I think they are incapable of understanding the extent to which the revolution wants to change things in the country,” said Mustapha Kamel el-Sayyid, a political science professor at The American University in Cairo. “To them, removing the president was enough.”

Its members, schooled in the old system of privilege, were not only appointed by Mr. Mubarak, but they worked alongside him for many years.

“You are talking about people who spent a lot of time working with the president, serving with him for a long time, developing a human relationship over the years,” said Dr. Khalid Sorur, a retired general who served for 30 years and was chief of staff of the medical corps. “They are not politicians, and now they have a lot of political tasks and they don’t know how to do this job.”

At the head of the council, the supreme leader, Field Marshal Mohamed Hussein Tantawi, is a longtime close ally of Mr. Mubarak. Field Marshal Tantawi, 75, has a long history of shunning the news media while wielding considerable influence behind the scenes in areas that reach far beyond the nation’s defense.

For the first time on Friday, Mr. Tantawi personally and publicly became the focus of the crowd’s ire as speakers called him a dictator and demanded that he resign.

“Dictator, dictator, Tantawi is next,” chanted a speaker on the stage before the crowd.

It is Field Marshal Tantawi, perhaps more than any other single person, who is now driving events in Egypt, and he has a long-established record of support for Mr. Mubarak’s priorities, chiefly an emphasis on Mr. Mubarak’s watchword of “stability,” according to government documents and people who say they have worked with him.

Before he visited the United States in 2008, the American Embassy in Cairo sent a cable to Washington describing him as “aged and change-resistant,” while also “charming and courtly.”

The cable, obtained by WikiLeaks and since made public, said that Field Marshal Tantawi was “mired in a post-Camp David military paradigm that serves his cohorts’ narrow interests for the past three decades.”

That same memo, by Ambassador Francis J. Ricciardone Jr., an expert in Egypt, concluded that Field Marshal Tantawi and “Mubarak are focused on regime stability and maintaining the status quo through the end of their time. They simply do not have the energy, inclination or world view to do anything differently.”

At a time when Field Marshal Tantawi has refused public explanations or interviews, the cables provide some insight into the American Embassy’s perception of his priorities, his loyalties and his values, perhaps helping explain his actions now.

“In the cabinet, where he still wields significant influence, Tantawi has opposed both economic and political reforms that he perceives as eroding central government power,” Mr. Ricciardone wrote in 2008. “He is supremely concerned with national unity, and has opposed policy initiatives he views as encouraging political or religious cleavages within Egyptian society.”

At the square on Friday, that sentiment seemed widely shared by speakers and demonstrators alike.

“Oh field marshal,” chanted the speaker on stage, “Why are you quiet? Are you with them, or what?”