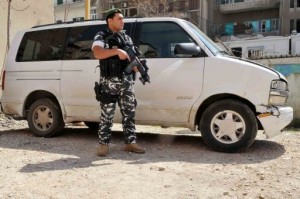 Lebanon Files website reported on Sunday that the Estonian Foreign ministry has revealed to LBC TV that it has contacted the Syrian foreign ministry for seeking help regarding the 7 Estonians who were kidnapped in the Bekaa region in Lebanon, shortly after leaving the Masnaa border crossing between Lebanon and Syria.

The spokesperson of the Estonian Foreign ministry Mina Lina Lind reportedly stressed that the contact with Syria was established with the aim of seeking Syria’s cooperation in locating the kidnapped Estonians. Syrian FM Walid Muallem was reportedly not contacted on the matter

“We received an email late yesterday and we informed the proper authorities,” said Rabih Haber, Lebanon Files chief adding “The authorities gave us permission to publish the email.”

The previously unheard of group, Haraket El Nahda Wal Islah (the Movement for Renaissance and Reform) said the Estonians were in good condition and that it would make known its demands at a later stage

The three IDs shown on the website were those of Kalev Kaosaar, August Tillo and Madis Paluoja. The other kidnapped were identified by authorities as Priit Raistik, Jaan Jagomagi, Andre Pukk and Martin Metspalu. All are in their 30s and early 40s.

The seven were abducted at gunpoint in a white van (picture) in the town of Zahle on March 23 after entering Lebanon through Syria on their bicycles.

Estonian Public Broadcasting was reportedly informed by Maj. Gen. Ashraf Rifi, the head of the Lebanese Internal Security Forces that the kidnappers have already transferred the kidnapped Estonians to another criminal gang and the purpose of the kidnapping is to seek ransom.

Several raids were launched by the internal security forces following the kidnapping . The raids took place mainly near the village of Majdal Anjar, which is located near the Syrian border an area known to harbor extremists and fugitives. Several people have reportedly been arrested in connection with the kidnapping.

The Bekaa area near the Syrian borders is reputed for lawlessness, drug trafficking and feuding tribal clans.