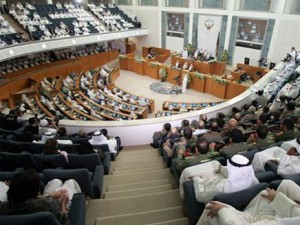 Kuwait’s cabinet resigned on Thursday over regional turmoil, the country’s official news agency said, in an apparent reference to the political unrest in neighbouring Bahrain.

The state-run agency said the cabinet resigned because of “recent local developments” and the “negative aftershocks on the country’s national unity, security and stability”.

The resignation appeared to be an attempt by three cabinet ministers, members of the ruling Al Sabah family, to avoid being questioned over why Kuwait did not contribute troops to the Saudi-led Gulf force that was sent to Bahrain.

The ministers submitted the resignation to the prime minister, who will refer it to the Amir,” a parliamentary source said. The news service of Al Watan newspaper, owned by a member of the ruling family, said the foreign minister was set to face a question that could “provoke sectarianism”.

“The government was ready to face any questioning except that of Saleh Ashour,” it said, referring to a Shia member of parliament. “The prime minister refused to have it discussed in order to prevent provoking sectarianism or insulting friendly countries.” Ashour wanted to discuss Bahrain because he said he was insulted in a discussion show on Bahraini state television for comments he made in support of Bahraini protesters.

“What’s clear is that the Kuwaiti government is not able to continue to function in its normal composition, and that a political crisis has been brewing even before the existing revolutions and uprisings in the region,” he said.

Meanwhile, Kuwait has warned Iran not to meddle in the Arab nation’s affairs in an escalating dispute over an alleged spy ring. KUNA said the message was relayed at a meeting between a senior Kuwaiti official and Iran’s top diplomatic envoy in Kuwait. Kuwait said it is to expel a number of Iranian diplomats in the spying row that dates back to the 2003 invasion of Iraq.

“There will be action against a group of Iranian diplomats … They will be considered persona non grata and expelled from Kuwait,” Foreign Minister Mohammed Al Sabah said.

He charged that the diplomats had proven links to the suspected spy ring, three members of which a Kuwaiti court condemned to death to Tuesday.