The Syria Revolution 2011 reported that a decision was taken today by the government to organize a rally in support of president Bashar al Assad Friday just after the prayers next to the Mosque of Khalid ibn al-Walid. According to the report Syrian workers are being forced to participate in the rally and whoever refuses will be fired from his job .

This development comes after The Syria Revolution 2011, which has emerged as the organizing force behind the demonstrations demanding “freedom” in Syria, called for rallies across Syria after weekly Muslim prayers on Friday April 1 , upping the pressure on the Syrian President. 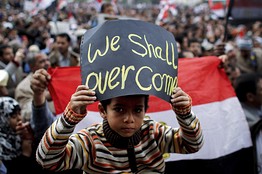 “Our date is Friday, from all houses, all places of worship, every citizen and every free man, to all squares, for a free Syria,” said a statement posted Thursday on Facebook by The Syria Revolution 2011.

“We want a civil, free, noble state that is modern and respects our heritage,” added the group, which has been a driving force behind protests which erupted on March 15 and have been focused in Daraa, south of the capital, and the Mediterranean port city of Latakia