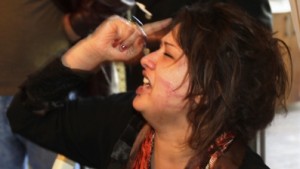 A distraught Libyan woman stormed into a Tripoli hotel Saturday to tell foreign reporters that government troops raped her, setting off a brawl when hotel staff and government minders tried to detained her.

Iman al-Obeidi was tackled by waitresses and government minders as she sat telling her story to journalists after she rushed into the restaurant at the Rixos hotel where a number of foreign journalists were eating breakfast.

She claimed loudly that troops had detained her a checkpoint, tied her up, abused her, then led her away to be gang raped.

Her story could not be independently verified, but the dramatic scene provided a rare firsthand glimpse of the brutal crackdown on public dissent by Muammar al-Qaddafi’s regime as the Libyan leader fights a rebellion against his rule that began last month.

The regime has been keeping up a drumbeat of propaganda in the Tripoli-centered west of the country under its control even as it faces a weeklong international air campaign against the Libyan military.

At a hastily arranged press conference after the incident, government spokesman Moussa Ibrahim said investigators had told him the woman was drunk and possibly mentally challenged.

Before she was dragged out of the hotel, al-Obeidi managed to tell journalists that she was detained by a number of troops at a Tripoli checkpoint on Wednesday. She said they were drinking whiskey and handcuffed her. She said 15 men later raped her.

“They tied me up … they even defecated and urinated on me,” she said, her face streaming with tears. “The Qaddafi militiamen violated my honor.”

The woman, who appeared in her 30’s, wore a black robe and a floral scarf around her neck and identified herself. She had scratches on her face and she pulled up her black robe to reveal a bloodied thigh. She said neighbors in the area where she was detained helped her escape.

The Associated Press only identifies rape victims who volunteer their names.

As al-Obeidi spoke, a hotel waitress brandished a butter knife, a government minder reached for his handgun and another waitress pulled a jacket tightly over her head.

Al-Obeidi said she was targeted by the troops because she’s from the eastern city of Benghazi, a rebel stronghold.

The waiters called her a traitor and told her to shut up. She retorted: “Easterners — we’re all Libyan brothers, we are supposed to be treated the same, but this is what the Qaddafi militiamen did to me, they violated my honor.”

It soon turned into a scene of chaos with journalists attempting to protect the woman from government minders who physically attacked and intimidated her.

Journalists who tried to intervene were pushed out of the way by the minders. A British television reporter was punched, and CNN’s camera was smashed on the ground and ripped to pieces by the government minders.

Eventually the minders overpowered the woman and led her outside, shoving her into a car that sped away. Al-Obeidi kept crying that she was certain she would be thrown in jail. She begged photographers to take her picture, raising her robe to show them her bruised body. A minder tried to cover her mouth with his hand to keep her from talking.

“Look at what happens — Qaddafi’s militiamen kidnap women at gunpoint, and rape them … they rape them,” al-Obeidi screamed.

She said she wanted to be taken to see the leader himself.

“I want to see Muammar al-Qaddafi. Didn’t he say that every victim will have justice? I want my rights,” she said.

The government spokesman said the woman was under investigation.

“The investigators did phone me and told me the lady is drunk and that she seems to be suffering mentally,” Ibrahim said. “They are checking on her health condition, her mental condition, whether she was really abused or if these were fantasies.”

Qaddafi’s crackdown has been the region’s most violent against the wave of anti-government protests sweeping the Middle East. Tensions have been rising between foreign reporters in the Libyan capital and the government minders who have sought to tightly control what they see and whom they talk to. Most of the international press corps is being housed at the Rixos hotel. Fox