Hamas will agree on Gaza ceasefire if Israel stops attacks 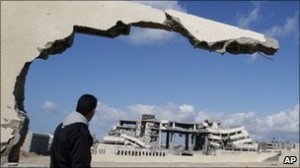 Militant groups in Gaza say they will agree to a ceasefire if Israel stops attacks on the Palestinian territory.

The move was announced by the Hamas group that runs Gaza following a meeting between its leaders and insurgent groups.

In the past week at least 10 Palestinians, including several civilians and children, have been killed by Israeli attacks.

In the same period, militants have fired 80 rockets and mortar shells.

BBC Gaza correspondent Jon Donnison says the past week has seen some of the most serious violence in and around Gaza since the end of Operation Cast Lead – Israel’s major offensive here more than two years ago.

But in a statement released after a meeting with all militant groups in Gaza, Hamas said the insurgents were “committed to calm as long as the occupation (Israel) commits to it”.

Khader Habib, an Islamic Jihad leader, told Agence France-Presse that “everybody confirmed that they respect the national consensus by calming things with the Zionist enemy”.

He added that the truce depended “on the nature of Israeli behaviour, and we insist on the need to respond immediately to each escalation by the occupiers”.

Hamas had pledged to try to restore a ceasefire that ended on 16 March when an Israeli air strike killed two Hamas militants in Gaza.

Israel said it had suffered “bouts of terror and rocket attacks”.

Prime Minister Benjamin Netanyahu said Israel would “act with great force and great determination to put a stop to it”.

On Wednesday, a bomb left at a bus stop in Jerusalem killed one person and wounded many others. No group has said it carried out that attack.

There has been no comment yet from Israel on the ceasefire offer.

Earlier, the commander of Israeli troops along the Gaza front, Maj Gen Tal Russo, said there was “anarchy” in Gaza.

“We are prepared for any possibility, the goal is we won’t in the end permit a situation where it is impossible for civilians to live here.”

Our correspondent says that in the past Hamas has not been able to rein in all militant groups in Gaza and its authority will be tested by this move.

Israel’s military power is vastly superior to the Palestinian militants, he says, and if there were another major conflict, Gaza would again come off worse.

More than 1,300 Palestinians died in the war two years ago. Thirteen Israelis were killed.