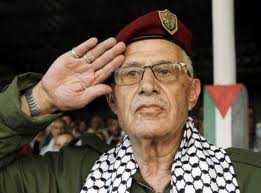 ” is not true and only serves those keen on destabilizing Lebanon. The group has never and will never resort to such actions.” According to a statement.

The denial comes after a security source told Kuwaiti newspaper al Anbaa that most probably the Estonians were kidnapped by Fatah al-Intifada, a Palestinian militant faction founded by Col. Said al-Muragha ( better known as ‘Abu Musa’…see photo ) , with Syria’s support .

In a related development MP Jamal al-Jarrah told Voice of Lebanon radio on Saturday that the Lebanese security forces have more leads concerning the abduction of the Estonians.

According to reports that could not be independently confirmed , The Syrian government asked its Palestinian and Hezbollah allies to kidnap the Estonians , who arrived in Lebanon on bicycles,   and return them to Syria.  One of the vehicles used in the abduction is registered in the name of a citizen from the southern town of Qana, a Hezbollah stronghold and the Syrian backed PFLP-GC ( Palestinian militant group ) has a base near the Lebanese Syrian borders . According to the report Syria was concerned that the tourists may have  taken  pictures of the anti-government  protests in Syria.

In 2007 Fatah al-Islam fought the Lebanese army from its stronghold in the Nahr al-Bared refugee camp near the northern port city of Tripoli.

More than 400 people, including civilians, died in three months of clashes between the two sides before the Lebanese army took control of the camp.

According to Al Hayat newspaper reports , Fatah al-Islam has close ties to Syria, and much of the leadership of Fatah al-Islam is made up of Syrian officers.