Update on the Estonians abducted in Lebanon 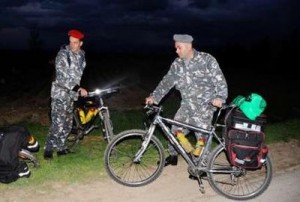 The whereabouts of the Estonian tourists who went missing in the eastern Bekaa Valley while on a biking trip remain unknown.

Voice of Lebanon radio station reported on Thursday that the Lebanese army is carrying out an intense search operation to locate the Estonians. The focus is on eastern Lebanese mountains mainly near the Palestinian armed bases and at Lebanese – Syrian border crossings.

LBC TV reported that the Lebanese security forces are cooperating with the Estonian authorities over the the fate of the 7 abducted Estonians, and have confirmed that the kidnappers are not amateurs.

Elie Marouni , a Zahle MP told Future TV on Thursday : “There is a possibility that the abduction of the Estonians and the developments in the Arab world are linked.”

“All possibilities are open, but we have no real information about what happened except that investigations are ongoing.” He said

The Seven Europeans were kidnapped near the Bekaa city of Zahle on Wednesday , reportedly within half an hour after they had entered Lebanon from Syria on their bikes.

March 14 MP Ahmed Fatfat told Voice of Lebanon: ” The abduction of the 7 Estonian tourists is a “very dangerous scenario that takes us back to the 80s. This is a message to all Lebanese; the purpose behind it is to paralyze the country.”

He said the abductions show that security is deteriorating in Lebanon

The event is “added to the dangerous messages that we heard, which led to the position by the Bahraini king stopping Lebanese from entering Bahrain,” he told Voice of Lebanon ( radio.

Bahrain on Tuesday warned its citizens against travel to Lebanon after Nasrallah pledged his support for majority-Shiite protesters against the country’s Sunni monarchy. Bahrain also urged its citizens who are living in Lebanon to leave the country immediately due to concern about their security .

Nasrallah should “be responsible and renounce his stance that directly interferes in the affairs of a free and independent state,” the MP added

Fatfat stopped short of accusing Hezbollah of being behind the abduction even though security sources told New TV yesterday that one of the vehicles used in the abduction is registered in the name of a citizen from the southern town of Qana, a Hezbollah stronghold.

Update1: March 14 MP Assem Araji told Akhbar al-Yawm newspaper : “The abductors of the Estonian tourists are definitely not from the region and I hope the kidnapping does not have anything to do with the developments in the region.”

Update: Security sources told Voice of Lebanon Radio station: Cameras captured footage of the kidnappers of the 7 Estonians while crossing a checkpoint. Information shows that the abductors headed to the PFLP-GC base.

Update: The Lebanese Armed Forces (LAF) arrested a Lebanese citizen on Friday in the town of Soueira on suspicions of involvement in the Wednesday kidnapping of the seven Estonians in the Bekaa Valley.

He also denied media reports that the kidnappers’ cars headed to the PFLP-GC Ain al-Baida base near Kfar Zabad.

No clear motive so far for the kidnapping , but according to the security source Libyan leader’s son Saif Gaddafi may be behind it to put pressure on the west. The documents reportedly left behind by the kidnappers indicate that the kidnapping was politically motivated and not for the sake of demanding ransom