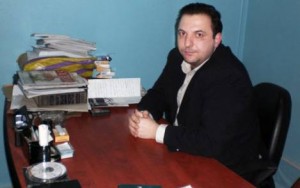 Darwish, who took part in a protest to demand the release of political prisoners last week, was arrested after he was called in for questioning by security police on Wednesday, the Syrian Observatory for Human Rights said.

Other development in Syria

– Syrian authorities have said they will “study” ending an emergency law in place since 1963 and improving living standards amid growing unrest in the country.

Buthaina Shaaban, media adviser to President Bashar al-Assad, announced at an extraordinary briefing in Damascus the formation of a committee to seek improving living standards.

She said the committee will also analyze the scrapping of the 48-year-old emergency law governing the country.

Shaaban said the government will look into licensing political parties. The announcement after a week of deadly protests in the southern city of Daraa.

Shaaban admitted that the protesters’ demands were “justified.

– The Syrian Revolution 2011 called on Facebook for a nationwide protest on Friday March 25 . It called Friday the Day of Dignity.