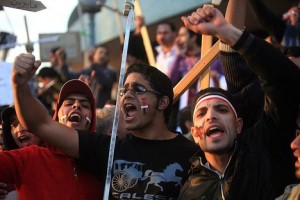 In Syria a third day of protests has been marred by violence. The police have opened fire on demonstrators using tear gas and live rounds killing one person and injuring around 100 others. This brings the total fatalities to 4 this week.

Demonstrators have set fire the ruling Baath party headquarters in Deraa, to the the main courts, and to two phone company branches.

The country has been ruled by the Baath Party headed up by president Basher al-Assad since a coup in 1963. All opposition parties are banned.

In an attempt to calm tensions, the authorities promised to release 15 schoolchildren who were arrested for scrawling opposition graffiti on a wall.

This was a rare concession, but commentators say it appears to be too little, too late.