Bahrain’s security forces razed a monument and cleared the Pearl roundabout in the capital Manama, the focal point of recent protests and one of the symbols of the unrest that has shaken the Middle East.

The 300-foot monument, built as a tribute to the Sunni-ruled kingdom’s history as a pearl-diving center, had become the backdrop to the Shiite majority’s uprising after protesters set up a month-long camp at the square.

Bahrain’s foreign minister, Sheik Khalid bin Ahmed Al-Khalifa, told reporters in Manama that the army brought down the monument because “it was a bad memory.”

“We are not waging war, we are restoring law and order,” Mr.Sheik Khalid said.

On Wednesday, Bahrain’s security forces, backed by the Saudi Arabian army, drove antigovernment demonstrators from the center of the capital and cleared Pearl roundabout setting off clashes that killed at least five people, including two policemen.

At least 12 people have been killed since the uprising started a month ago. 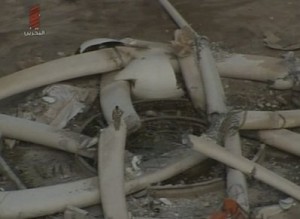 The funeral Friday of a protester killed earlier in the week passed off peacefully, with thousands of mourners chanting antigovernment slogans. They marched through the Shiite stronghold of Sitra on the outskirts of Manama Friday, as riot police armed with tear gas and guns manned the entrance to the town.

Ahmed AlFarhan, who was in his early 20s, died from a head injury in violent clashes between antigovernment protesters and security forces in Sitra, the scene of some of the fiercest outbreaks of violence over the last few days.

The presence of about one thousand Saudi troops has heightened fears of a sectarian conflict and of possible involvement by Iran, Saudi Arabia’s main rival for regional influence.

At a press conference Friday, Mr. Sheik Khalid issued a stern rebuke to Iran, which has written to the United Nations and the Arab League complaining about the presence of foreign forces in the strategic Gulf state that hosts the U.S.’s Fifth Fleet.

“The Islamic Republic of Iran is talking about something which is the internal affairs of Bahrain and this is very clear interference,” he said.

Bahrain’s King Hamad bin Isa Al Khalifa has declared a three-month state of emergency and a curfew has been imposed in parts of the capital, which remains under the control of the security forces.

Army tanks still surround the Salmanya hospital in Manama and pro-government vigilantes, wearing balaclavas and armed with bats and swords, have set up vehicle checkpoints in some areas of the city.

More foreign troops from the six-member Gulf Cooperation Council will arrive soon, Mr. Sheik Khalid added. The GCC is made up of Saudi Arabia, the United Arab Emirates, Bahrain, Qatar, Oman and Kuwait.

Offices of the secular leftist opposition group Waad were burned down early Friday morning. Waad’s leader Ebrahim Sharif, a moderate Sunni, was arrested in a dawn raid along with other opposition leaders on Thursday.