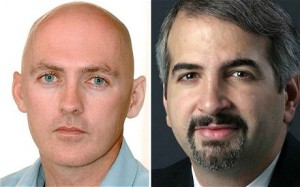 Four New York Times journalists missing in Libya since Tuesday will be released by Libya today, according to the son of Libyan leader Moammar Khadafy.

Seif Islam el-Qadhafi, told Christiane Amanpour in an ABC News interview that at least one of the four was detained in the city of Ajdabiya, The Times reports.

Libyan government officials have told the U.S. State Department that all four would be released today, The Times reports.

The four journalists were last heard from on Tuesday morning as Libyan troops were advancing in eastern Libya.

Speaking of one of them, Seif Gadhafi said photographer Lynsey Addario was arrested by Libyan troops who realized she was a foreigner.

“But then they were happy because they found out she is American, not European,” he said, according to a transcript of the ABC interview reported by The Times. “And thanks to that, she will be free tomorrow.”

The other three journalists are Anthony Shadid, The Times’s Beirut bureau chief and a two-time Pulitzer-prize winning foreign correspondent; photographer Tyler Hicks; and a reporter-videographer, Stephen Farrell. US today