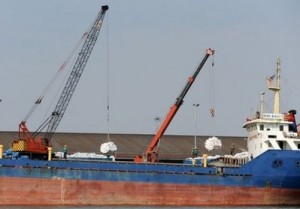 Malaysian police said on Thursday that they have seized dismantled equipments that were meant for producing weapon of mass destruction, including nuclear warheads, from a vessel in the country’s major port last week.

The equipment was found in two containers on a Malaysian- registered vessel bound for Iran.

Malaysian police chief, Ismail Omar, told Xinhua that the police believe the items seized were aggregate boilers and they are still being inspected by the national atomic agency and the forensics department.

No arrests have been made and the police have sought help from the Interpol in investigating the case. The vessel was inspected when it reached Port Klang after police received tip-offs. Ismail refused to reveal where the tip-off might have come from, saying “the point is, we have acted.”

The seized equipment was said to have been among those listed as controlled items by the United Nations Security Council.

The case is now being investigated under the Strategic Trade Act, under which offenders could be sentenced to at least five years behind bars and fined millions of dollars if convicted of exporting items that could be used to make weapons of mass destruction.

“We are getting better in detecting terrorism and it shows that we (the Malaysian police) are ready to face situations like that,” says Ismail.

Photo: Malaysian police have confirmed they have seized two containers at Port Klang which may contain parts used to make nuclear weapons, from a ship bound for western Asia. AFP