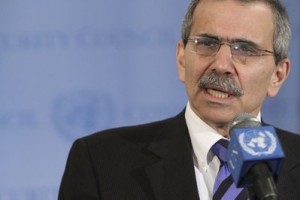 Even with Libyan rebels trying to beat back Col. Moammar Gadhafi’s advancing army, the U.N. Security Council displayed no urgency Monday to adopt a no-fly zone over the war-torn North African nation.

In a private session, diplomats expressed enough doubts and concerns over a no-fly zone that it appears quick approval will not occur, despite the recommendation for such a zone by the Arab League meeting Saturday in Cairo.

The United States and Russia both raised issues behind closed doors regarding the no-fly proposal. France, the most supportive of the idea, pushed for council backing in the face of some hesitancy by big powers.

One U.N. diplomat was furious at the slow pace of action. “Everyone is filibustering, so the patient will be dead,” the frustrated diplomat remarked, speculating that major powers on the council really don’t want to get involved in Libya for economic and political reasons.

Russian Ambassador Vitaly Churkin told reporters there are “fundamental questions which have not been answered.”

Churkin asked “who will implement the no-fly zone?” He said Russia was concerned air strikes could exacerbate the military situation.

French Ambassador Gerard Araud thought the Arab League request for a no-fly zone was a “game-changer.” However, the game may not begin at the Security Council if reluctance holds.

The French ambassador did say legitimate questions have been asked, but no country completely refused. Araud said he regrets some partners on the council do not share France’s sense of urgency.

In Washington, President Barack Obama said during an appearance Monday that the United States “will be continuing to coordinate closely both through NATO as well as the United Nations and other international forums to look at every single option that’s available to us in bringing about a better outcome for the Libyan people.”

Meanwhile at the U.N., Arab League Ambassador Yahya Mahmassani said the Security Council “better start shouldering its responsibility and take action before they regret it.” The ambassador warned that the council doesn’t want another Rwanda or Bosnia on its hands by acting too late to protect rebels fighting government forces.

And the French ambassador said there is a “coalition of the willing” that exists.

However, after the invasion of Iraq, bruised feelings at the U.N. also exist. This time, it is the United States that is taking a deliberate approach while it is the Arab League demanding rare military action — quickly — on one of its own suspended members.

Council member Germany is proposing imposing more sanctions on Libya — sanctions which would prevent more oil revenue from going into the pockets of the Gadhafi regime.

France and the United Kingdom returned to tweaking their no-fly zone resolution, which has been held in a contingency mode should the council act ready for a vote. CNN