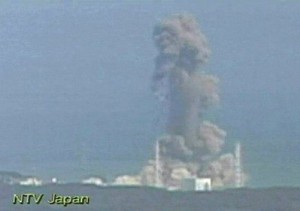 A hydrogen explosion Tuesday morning destroyed the outer building of a quake-damaged Unit 2 nuclear reactor at the Fukushima No. 1 power plant. Engineers had been struggling overnight to cool the nuclear core and stave off a meltdown that could release radioactivity over a wide area. It was the third reactor at the site whose external structure had been damaged by such an explosion.

Neither of the reactor containment vessels of Units 1 and 3 had been damaged in the earlier explosion and there is no evidence so far to suggest the vessel of no. 2 had been damaged either.

Officials had feared the possibility of such an explosion because the fuel core had been exposed to air for more than two hours, allowing it to overheat. When the zirconium cladding on the fuel rods was subsequently exposed to seawater used for cooling, it released hydrogen gas, which built up to dangerous levels in the plant and was most likely ignited by a spark.

Japan’s nuclear crisis had already taken a frightening turn for the worse after officials acknowledged that fuel rods at the Fukushima No. 1 reactor had been exposed to air, heightening the risk of an uncontrolled release of radiation into the environment.

In extraordinary televised scenes, three executives from the utility that runs the crippled complex in Fukushima prefecture, about 150 miles north of Tokyo, acknowledged that pumps funneling seawater into one of the reactors had halted temporarily, a major setback in efforts to cool the superheated core.

“We are trying to reopen the valve,” said one of the officials from the Tokyo Electric Power Co. as they passed the microphone back and forth among themselves. “The fuel rods are exposed. We are trying to get the pressure down and pump water into the pressure vessel again.”

It was the gravest development to date in the crisis brought by Friday’s devastating temblor, which triggered a tsunami that wreaked massive destruction on the nation’s northeastern coast. More than half a million people have been displaced, and the death toll is widely expected to soar into the tens of thousands.

About 2,000 bodies were discovered Monday at two sites in a single prefecture, or state, one of several pummeled by the earthquake, the worst in Japan’s recorded history. Whole coastal villages were wiped from the map, and a full assessment of the extent of deaths and damage was expected to take weeks. Meanwhile, hardship and privation in the quake zone grew, with tens of thousands of people spending a fourth night in chilly shelters.

In the parallel crisis at the Fukushima No. 1 (Daiichi )plant in the town of Okuma, fuel rods twice were not covered by the seawater being used to cool down the reactor, resulting in exposure for about 140 minutes, the Kyodo News agency reported. Prolonged exposure of fuel rods to air can cause them to heat up and melt at least partly. If they melt completely, they could burn through the containment vessel, causing release of radioactive material into the environment.

Officials at Japan’s Nuclear and Industrial Safety agency were cited by Kyodo as saying that, even in a worst-case scenario, the three troubled reactors at Fukushima No.1 had been depressurized by the release of radioactive steam, which would decrease the destructive effect of any breach.

Japan’s nuclear crisis began Friday soon after the earthquake, when the huge tsunami destroyed seawalls and pushed far inland, damaging or destroying pumps and generators crucial to safe operations at the complex. The cooling systems of two reactors were seriously compromised, leading to hydrogen explosions on Saturday and again Monday in their outer containment buildings.

The current problem is focused on another reactor at the Fukushima No.1 plant, where a 12-mile evacuation zone was established, forcing nearly 200,000 thousand people to flee.

Japan’s chief Cabinet secretary, Yukio Edano, had said earlier that the hydrogen explosion at the third reactor posed little threat of a large-scale release of radiation — an assertion that drew anger and skepticism from some in the earthquake zone.

On Monday, there were signs that the legendary patience and politeness of Japanese in the face of such adversity was wearing thin. A widely held sentiment among disaster victims and millions more who haven’t been directly touched is resentment at what many feel is the lack of clear, direct information from government officials on the state of the nuclear reactors in Fukushima.

But other issues are also fraying nerves.

In Natori, north of Tokyo, the top floor of the City Hall was repurposed into a disaster-relief center. There, in an oft-repeated scene, a woman in red pants and a brown coat loudly berated government workers for sitting comfortably in their offices with heat, 24-hour power and water when the rest of Miyagi prefecture lacked basic services. Voice cracking, she added that the government had been far too slow in restoring electricity and repairing roads and basic infrastructure.

“She’s complaining that our operation doesn’t work so well,” said Chizuko Nakajima, a government worker in the senior citizen department, who was helping distribute food as an emergency volunteer. “Actually, it’s true. We’re so overwhelmed, have to do so much and it’s not working perfectly. I understand she’s angry and wants to direct it somewhere, but I’d rather people didn’t do that.”

Nakajima said the lack of clarity on the nuclear issue, given all the problems at the Fukushima reactors, has frayed nerves further. “Some people are angry,” she said. “Many people complain about food shortages. Japanese people won’t riot, but they’re very upset.”

The emergency food handouts are meant for those who’ve lost their homes. But with power out, most supermarkets, restaurants and convenience stores closed, and gasoline very difficult to acquire, people in undamaged houses are also asking for government allocations as well.

Some officials said they saw a sliver of hope that food-related angst might ease soon. More citizens had started donating food on the streets, some making large pots of miso soup for passersby. “I really hope people don’t panic,” Najakima said. “You see what it’s like. We have to do so much.”

Adding to the sense of anxiety, strong aftershocks have rippled across a wide area since Friday’s quake.

At least two tremors were felt early Tuesday in Tokyo, including one with a preliminary magnitude of 4.1, the public broadcaster NHK reported. Japan’s Meteorological Agency said Saturday there was a 70% probability of another powerful earthquake coming in three days.