Israel seizes ship loaded with arms and headed to Egypt 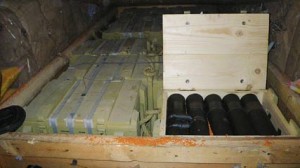 Israeli naval commandos intercepted and commandeered on Tuesday a cargo vessel en route from Turkey to Egypt that was loaded with weaponry, Israeli officials said.

Military officials said that the ship, which was flying a Liberian flag, had sailed to Turkey from Syria. They said it was not clear where the weapons were loaded, but the assessment was that they were bound for Gaza, the Palestinian coastal enclave controlled by Hamas.

The military noted in a statement that Turkey “was not tied to the incident in any way.”

Prime Minister Benjamin Netanyahu said that he authorized the operation in the early hours of Tuesday morning because Israel had a “solid basis” to believe there were weapons on board that were “destined for use against Israel.”

The interception took place outside Israeli territorial waters 200 nautical miles west of the coast and was in accordance with international maritime law, he said. He added that the weapons shipment originated in Iran but did not elaborate.

The ship was being escorted to the Israeli port of Ashdod where the crew would be questioned and the cargo would undergo further inspection, officials said.

Israel’s defense minister, Ehud Barak, said that he and the military chiefs had been tracking the ship for the last few days.

“The goal of the smuggling was to harm Israel’s security,” Mr. Barak said in a statement. The military, he said, “acted to defend Israel’s security.” He added that Israel would continue to act “determinedly, and everywhere, to defend the country.”

Hamas has largely maintained an uneasy ceasefire in Gaza since the end of Israel’s three-week military offensive there in January 2009, which came after years of persistent rocket fire from Gaza against southern Israel. But smaller groups have continued sporadic rocket and mortar attacks, and Israeli military officials have stated repeatedly that Hamas has been building up and upgrading its weapons stocks.

The Israeli Navy seized a merchant ship 100 miles off the Israeli coast in November 2009 that it said was carrying 500 tons of weapons, including rockets and missiles, disguised as civilian cargo. Israel displayed many of the weapons and asserted that they had originated in Iran and were bound for Hezbollah, the Iranian-backed Lebanese Shiite organization that Israel fought in a monthlong war in 2006.

The military said that the vessel intercepted on Tuesday had sailed from was en route from the Turkish port of Mersin to Alexandria, Egypt.

There was also contact between Israel and Turkey over the interception, according to Yigal Palmor, a spokesman for the Foreign Ministry, but he said that he could not elaborate.

Israel was careful to emphasize that it had ascertained that there was no Turkish or Egyptian involvement in the incident., to avoid any misunderstanding.

Israel’s relations with Turkey, a long-time important regional ally, have been strained since Israel’s war in Gaza, and were nearly severed after Israeli naval commandos killed nine activists during a confrontation on board a Turkish passenger ship that was part of a flotilla trying to breach Israel’s naval blockade of Gaza in May 2010. NYT

Photo: The Israel Defense Ministry released this photo Tuesday of weapons found on a ship traveling to Egypt. The Israeli navy said the arms were on their way from Syria to Palestinian militants in the Gaza Strip.