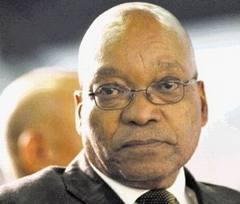 The Department of International Relations and Co-operation yesterday confirmed that the government had written to financial institutions, private agencies and state departments ordering the “verification and freezing” of assets belonging to Gaddafi and his close associates.

Department spokesman Clayson Monyela has revealed details of a phone conversation between Zuma and Gaddafi. He said Zuma had told Gaddafi to stop his government’s violence against its own people.

Libya is embroiled in a civil war sparked by pro-democracy protests calling for an end to Gaddafi’s 42-year rule. The violence has claimed hundreds of lives, leading to the United Nations Security Council imposing targeted sanctions against Gaddafi, his family and other members of his government.

Monyela said South Africa, which has a non-permanent seat on the Security Council, had “co-sponsored” the resolution on Libya and was now bound by it “to ensure that money does not leave this country and end up in the hands of Gaddafi, his family or inner circle”.

The Libyan government has a number of commercial interests in South Africa, including a stake in the Legacy Group, owners of the Michelangelo in Sandton and other exclusive hotels.

Monyela said the government was busy verifying what assets the Gaddafi family owns in South Africa. He said the verification process was a necessary first step “so that their dividends can be calculated and we can make sure they don’t leave the country.

“The assets that are known already have been frozen. I can confidently say that no money has left the country to Gaddafi.”

He said Zuma’s telephonic conversation with Gaddafi last week had given the president a chance to complain about the excessive force Gaddafi’s government had used against protesters.

“Our president took advantage of the call (made to Gaddafi) to convey to him personally that he has to stop the killing of innocent people in Libya.

“He told him that it is unacceptable and that South Africa condemns, and will not accept, the situation that is happening there.

“There needs to be a dialogue and a peaceful and speedy resolution to the crisis,” said Monyela. Timeslive