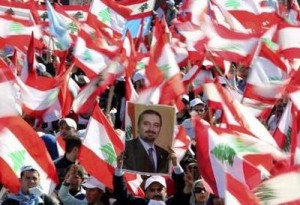 The road in the town of Makneh in northern Bekaa was reportedly closed by youth using burning tires to prevent those who participated in the March 14 rally from returning to their houses, according to media reports

The Lebanese army reportedly intervened to resolve the issue

.More than one million Lebanese of all faiths… Christians. Druze , Muslim Shiites and Sunnis demanded that Hezbollah be disarmed as they rallied to mark the sixth anniversary the Cedar Revolution, the uprising which inspired the recent revolts in the Middle East, International news agencies reported

The theme at Sunday’s rally is simple:” We want one state …one army to defend the country

lets unite the country and get rid of all the other states and armies .” the organizers said in reference to Hezbollah’s state within the state of Lebanon and the non-state ( illegal) arms