Over 800 injured in Bahrain political clashes 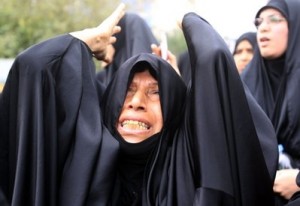 Hundreds of people were injured in violent clashes Sunday between protesters and armed civilians backed by police in this small island nation.

The latest violence came after a month of protests led by the Shiite majority to demand sweeping political reforms and possibly the ouster of the nation’s Western-allied Sunni monarchy.

Police then sought to disperse approximately 350 protesters by using tear gas in order to clear the road, the statement said.

Clashes also were reported at the University of Bahrain in Sakheer South Bahrain. The school then announced it will stop lectures in the campus until further notice.

In all, more than 800 people were injured, four of them critically, said Ahmad Alumran of Salmaniya hospital.

This latest protests came a day after America’s defense secretary said he’s “convinced” that Bahrain’s royal leaders are “serious about real reform and moving forward,” but emphasized that they must move quickly.

Defense Secretary Robert Gates was visiting the restive and strategically important island kingdom, where he huddled with King Hamad and Crown Prince Salman and talked about the importance of engaging with opposition forces.

“I think that the concern now is that it’s important that they have somebody to talk to and that the opposition be willing to sit down with the government and carry this process forward,” Gates said.

Photo: An anti-government protester cries as she watches people overcome by tear gas and hit by rubber bullets being evacuated to hospital Sunday, March 13, 2011, in Manama, Bahrain. USA Today