The tsunami that slammed Japan hit Hawaii early today, and waves were spreading as people along the island chain’s coast evacuated and warnings were issued for U.S. West Coast states.

Hawaii was hit by a 1-meter (39-inch) wave, according to scientists at the Pacific Tsunami Warning Center, which wasn’t anticipating major damage. 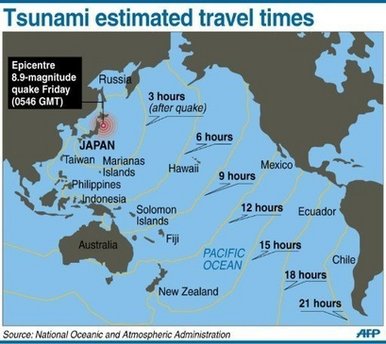 The Coast Guard in Hawaii has received no emergency calls, according to Kurt Fredrickson, chief petty officer for the 14th district, based in Honolulu. Ports in Honolulu and Guam remain closed until any damage can be assessed, he said.

The tsunami swept through Hawaii about seven hours after Japan was struck by its strongest earthquake on record. The 8.9- magnitude temblor shook buildings across Tokyo and unleashed a seven-meter-high tsunami that killed hundreds as it engulfed towns on the northern coast. Within hours of reaching Hawaii, waves were hitting the coast of Oregon, the Associated Press reported.

The Philippines, Indonesia and Chile were among more than 20 countries told to brace for a possible tsunami, after the Pacific Tsunami Warning Center raised an alert. The U.S. issued tsunami warnings and watches in Hawaii, Alaska, California, Oregon and Washington state, as well as Guam and the Northern Marianas Islands, Federal Emergency Management Agency administrator Craig Fugate said in a statement.

“We remind everyone who lives in the region to monitor their local news for instructions from their state and local officials, and if told to evacuate, evacuate,” Fugate said.

President Barack Obama said that he has instructed FEMA to be ready to assist Hawaii and other U.S. states and territories that may be affected by a tsunami.

“We are asking all our citizens in the affected region to listen to their state and local officials,” Obama said in a written statement released by the White House today.

The first tsunami waves are expected to hit San Francisco’s Golden Gate Bridge at about 11:08 a.m. New York time and Santa Barbara at 11:17 a.m., according to the National Oceanic and Atmospheric Administration.

Golden Gate service disruptions aren’t expected, Marie Curie, spokeswoman for the Golden Gate Bridge District that operates the bridge, ferries and a bus service, said in an interview on KGO-TV in San Francisco.

“Ferry service is planning regular service,” Curie said. “We are cautioning people to be careful with their coffees.”

Lieutenant Commander Rick Foster of the Coast Guard in San Francisco said the guard is taking steps to keep its equipment safe in the event it is needed. They are putting additional mooring lines on cutters and taking smaller boats out of the water. Although all ports in California remain open, the guard is urging “mariners to not get on the water,’’ he said.

The San Francisco Police Department is asking people not to go to area beaches, Lieutenant Troy Dangerfield, a spokesman for the department, said in a telephone interview.

“We have closed the beach area in San Francisco from Los Lobos and 48th Avenue all the way south to Lake Merced, which is most of the Pacific Beach area,” Dangerfield said. “We’re advising people not to hang out at the beaches and stay on higher grounds.”

Santa Cruz notified 6,600 residents who live near the coast to evacuate their homes, said Enrique Sahagun, public information officer of Santa Cruz County, which he estimated has 250,000 residents.

In Waikiki, a tourist area of Honolulu, guests at the Outrigger Waikiki Beach and Outrigger Reef hotels were moved above the fourth floor well before the tsunami’s arrival. Hotel managers and employees gathered in an 11th-floor suite to watch the tsunami from 100 feet above.

Bonnie Lopez and her daughter Pasha, who live on the second floor of a two-story walk up on nearby Lewers Street, sought shelter at the Outrigger.

“It was scary when the police and fire department came through our neighborhood,” Lopez said. “Last year’s tsunami wasn’t like this one.”

The waves hit about 20 minutes later than predicted. When the water began to retreat off Waikiki Beach, Lopez said that she’d never seen anything like it.

“It was like someone had taken the thing out of the bath tub and let all the water run out,” she said.