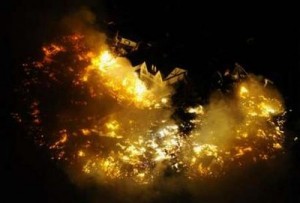 An 8.9 magnitude earthquake struck Northeast Japan, triggering a tsunami that caused widespread devastation along that nation’s coast and sparking alarms around the Pacific Rim.

The earthquake was the largest in Japan’s recorded history and is sure to impact economies around the Pacific. From Hawaii to Russia, tsunami warnings have been issued. The U.S. mainland is also in danger, with warnings that a tsunami could hit the West Coast from California to Oregon. The damage to Japan has not yet been assessed, though more than 20 people are confirmed dead and that toll is expected to arise. The tsunami also caused widespread damage along Japan’s coast and has caused problems at a Japanese nuclear power plant. In Hawaii, islanders and tourists were heading for high ground ahead of the waves. In California, warnings have been issued along the coast.

Photo: Buildings burn after an earthquake near Sendai Airport, northeastern Japan March 11, 2011.A massive 8.9 magnitude quake hit northeast Japan on Friday, causing many injuries, fires and a ten-metre (33-ft) tsunami along parts of the country’s coastline. A tsunami warning has been issued for the entire Pacific basin except for the mainland United States and Canada following a huge earthquake that hit Japan on Friday, the Pacific Tsunami Warning Center said.