‘Your Flag…Your Identity’ campaign launched ahead of rally 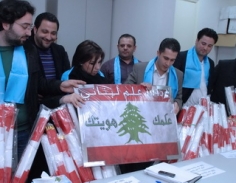 The Future Movement youth launched a campaign across Lebanon ahead of the Sunday rally , entitled “Your Flag…Your Identity.”

According to a statement issued by the Future Movement, 10452 Lebanese flags –symbolizing Lebanon’s total area –will be distributed across the country as part of the preparations ahead of the March 14 coalition’s Sunday rally.

The flags will be distributed to the Lebanese citizens starting Thursday, the statement added.

March 14 marks the 6th anniversary of the Cedar revolution when over 1 million Lebanese gathered in down Beirut to protest against the murder of the the late PM Rafik Hariri and called on Syrian troops to leave Lebanon. The Syrian troops withdrew in April 2005, but the Syrian regime retained its influence through Hezbollah and its March 8 allies

The March 14 coalition is holding the rally on Sunday March 13 “to reaffirm its commitment to the principles of the Cedar Revolution” , according to a Future Movement statement

Hariri vowed last week to fight the use of non-state weapons “peacefully and democratically.”