Why does STL make Hezbollah panic?

“Why does Hezbollah panic whenever the Special Tribunal for Lebanon (STL) requests information?” the Future bloc asked in a statement issued on Tuesday following its weekly meeting.

The statement added that the recent talk about STL requests have been greatly exaggerated for no reason.

“Why is Hezbollah leading a campaign against the tribunal when the content of the indictment has not yet even been issued?” the statement asked.

The Future MPs called for massive participating in Sunday’s March 14 rally, adding that such a demonstration would be the best democratic way to face March 8’s coup and attempts to impose one opinion on all Lebanese. 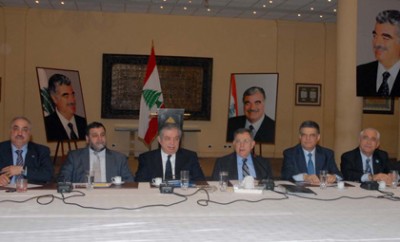 The MPs also said that statements criticizing the March 14 alliance for its position against non-state weapons are “campaigns aimed to distort facts. March 14 and the Future Movement never criticized or called for stopping resistance against Israel. We criticized the arms because they have been targeting the Lebanese citizens .”

The statement added that arms to resist Israel and under the authority of the Lebanese government are accepted, while those targeted at the Lebanese people are totally rejected.

“If caretaker Ministers Charbel Nahhas, Gebran Bassil, Ziad Baroud and Ghazi Aridi remain adamant in not cooperating with Prosecutor Daniel Bellemare, they and their party backers would have to face the Lebanese public which is calling for holding accountable ex-Premier Rafik Hariri’s assassins”, said the general-secretariat following its weekly meeting.

Nahhas had reportedly told Speaker Nabih Berri that he had stopped meeting the demands of the U.N. commission investigating Hariri’s assassination since last year’s speech by Hezbollah leader Sayyed Hassan Nasrallah in which he called on the Lebanese government and officials to boycott the STL and not cooperate with the commission.

Caretaker Justice Minister Ibrahim Najjar told LBC on Saturday the the refusal to cooperate with the Special Tribunal for Lebanon “might cause Lebanon international legal responsibilities adding that Lebanon has the right to revise STL requests, but has “no right to hamper the judicial process .”

Last November, Hezbollah chief Sayyed Hassan Nasrallah said that his group will “cut off the hand” of anyone who tries to arrest any of its members for the Hariri killing, raising fears of renewed violence in Lebanon.

The March 14 coalition is holding a rally on Sunday March 13 “to reaffirm its commitment to the principles of the Cedar Revolution” following the forced collapse of Saad Hariri’s unity government.