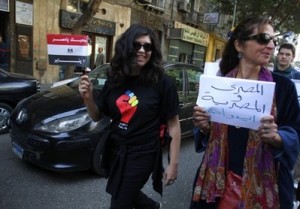 Human Rights First today voiced concern about reports of recent violent incidents in Egypt. The group notes that while instability is perhaps inevitable in this uncertain transitional period as Egypt moves towards the formation of a new democratic government, the Egyptian authorities have an obligation to prevent acts of sectarian violence, and to prevent attacks on peaceful protesters.

Today, more than a dozen Christians were shot and killed and scores more were wounded in sectarian clashes in Cairo that came just days after a deadly church burning in Helwan. In response to this most recent incident, Human Rights First’s Neil Hicks stated, “Today’s deadly clash should serve as a wake-up call for Egyptian authorities, who must immediately prioritize stemming sectarian violence and protecting the interests of Egypt’s Christian minority, including their right to protest non-violently against inequality and discrimination. Religious leaders and other public figures should use their influence to speak out against hate and condemn violence.”

Human Rights First is also concerned that a March 8 Tahrir Square demonstration by women calling for greater equality was attacked by a mob of men. Hicks noted, “This kind of mob violence has no place in a democratic society and should be prevented by the authorities and that those responsible for attacking peaceful demonstrators should be prosecuted.”

He concluded, “A meaningful transition to a more democratic Egypt is damaged by violent incidents of this nature. Egypt’s leaders have a responsibility to ensure that all Egyptians are protected and able to express themselves freely and peacefully.”

Photo: An Egyptian woman, right, carries a banner in Arabic that reads:” Egyptian man and woman are one hand ” as they march to Cairo’s central Tahrir Square to celebrate International Women’s Day, Egypt, Tuesday, March 8, 2011. A protest by hundreds of Egyptian women demanding an end to sexual harassment and equal rights has turned violent when men verbally abused and shoved the demonstrators, telling them that they should go home where they belong. AP