Egypt: 13 killed in clashes between Christians and Muslims 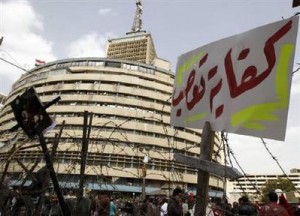 Religious authorities in Egypt called for calm and tolerance in Cairo on Wednesday, after bloody clashes between Christians and Muslims left at least 13 people dead.

Pope Shenouda, the patriarch of the Coptic Christian church, ‘requested an investigation into the events and asked priests to work to spread calm,‘ Matta Sawiris, a member of the council of Coptic Orthodox Churches, told the German Press Agency dpa.

Egypt’s Ministry of Awqaf, which is responsible for running mosques, called on citizens to unite and not to heed calls for sectarian behaviour.

‘Egypt is able to overcome this situation and face the threats to its national unity and cohesion,’ Awqaf Minister Abdullah al-Husseini said in a statement.

According to the Ministry of Health, at least 13 people were killed and 140 were injured during overnight clashes between Muslims and Christians.

An earlier death toll had confirmed that six Christians and five Muslims were killed in the violence, according to the attorney general’s office.

A lawyer for the Coptic Orthodox church had earlier told dpa that all of the victims were Christian.

The attorney general has charged 15 people with illegal possession of weapons and destruction of private and public property.

The violence erupted on Tuesday evening after more than 1,000 Christians gathered in the slum neighbourhood of Manshiyet Nasr to protest against the burning of a church south of Cairo.

‘As the demonstration occupied a main road and prevented traffic from passing, clashes erupted between protesters and the drivers of several vehicles,’ Samy Roushdy, a Coptic resident who was at the protest told dpa.

Residents from surrounding neighbourhoods, some of whom were armed with knives, then attacked the protesters and the violence escalated.

The clashes, which included the use of gunfire and molotov cocktails, also spread to the nearby neighbourhoods of Sayyeda Aisha and el Qala’a.

‘The numbers that came out in response to the protest were much larger than the protest itself,’ Roushdy said.

‘Ten factories in Manshiyet Nasr were torched, there were fires everywhere,’ he said.

The Egyptian military fired shots into the air in a bid to control the riots.

On Wednesday, thousands of Coptic Christians protested in front of the state television and radio building in central Cairo for the fourth day in a row over the burning of the church, which followed clashes between Muslims and Christians in the southern town of Sol.

The protesters, hundreds of whom had spent the night in front of the Cairo building, accused the military of failing to protect Coptic communities and churches.

Religious tensions occasionally lead to violence in Egypt, where Christians comprise 10 to 15 per cent of the population. DPA

Photo: Christians demonstrate in front of the Egyptian Television building to protest the torching of a church in the village of Atfeeh, south of Cairo March 8, 2011