Aoun: Arms outside the state’s authority is abnormal 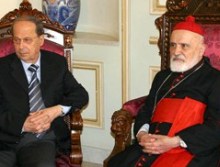 Following his meeting Aoun said that “now is not the right time to renounce non-state weapons.” In reference to Hezbollah arms

“Non-state weapons are not eternal, but now is not the appropriate time to abandon them,” Aoun told reporters in Bkirki

Aoun , a key ally of Hezbollah added: “We know that the presence of arms outside the state’s authority is abnormal, but abandoning it at this time is risky, however these arms will not exist forever.”

This comes after Aoun told reporters yesterday: “We are proud of the Resistance’s weapons,”

Aoun yesterday attacked March 14 for campaigning against Hezbollah arms saying “this harms coexistence and national causes that we are proud of.”

Aoun said that “there is no misunderstanding” between him and the patriarch, but that they only “have different views in politics ” and added : “We thank Sfeir for his long years of service and we are keen on supporting Bkirki.”

Commenting on his previous criticism of Sfeir he said: “We always apologize to the Patriarch and all the people.”