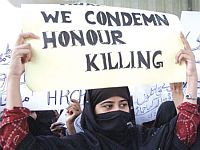 International Women’s Day marked its 100th year Tuesday with protests against “femicide” in its various forms around the world — from honour killings in Turkey to wanton violence in Guatemala to the deadly crushing of a women’s rally in Ivory Coast.

In Turkey, thousands of women marched to denounce honour crimes despite a 2005 law that carries jail terms of up to life imprisonment.

“Don’t Turn Our Wedding Dresses into Shrouds,” they chanted.

A woman deemed to have brought shame on her family perhaps because she was raped or eloped with a boyfriend to avoid an arranged marriage can be the victim of an honour killing by a male family member.

Hundreds of women demonstrated in Ivory Coast meanwhile to condemn the killing of seven women at a rally last week demanding that strongman Laurent Gbagbo quit the presidency after losing elections.

Mostly dressed in white and wearing red headbands, they marched to “pay homage to the women killed,” an organiser said. “We are not going to stop demonstrating until Laurent Gbagbo leaves.”

In Guatemala, where a culture of impunity saw nearly 700 women killed in 2010 alone, the head of a commission on “femicide” called for a specific statute on femicide.

Palestinian women took to the streets of Gaza to call for an end to the Israeli occupation.

In the West Bank town of Beit Ummar, dozens of women blocked a major road for half an hour to protest Israeli roadblocks.

“Part of the women’s rights issue is the harm caused by the Israeli occupation,” said activist Fadwa Khader. “Can you imagine women being woken up and kicked out of their homes in the early morning so their homes can be demolished to make way for settlements?” she asked.

“We are talking about human rights and women’s rights,” she said.

The European Union used the occasion to hail women’s “crucial role in bringing about change in northern Africa”.

“Amidst violence, women have joined the struggle for change,” said the two women vice-presidents of the European Commission, Catherine Ashton and Viviane Reding. “Women must be at the heart of the discussions over the future order.”

Whether in T-shirts and jeans or robes and veils, tens of thousands of women have made their voices heard in the streets, from Tunis to Cairo, from Manama to Sanaa, to demand reform in a region long ruled by autocracies.

Many around the world focused on gender equality, which OECD Secretary-General Angel Gurria called “a moral imperative as well as an economic necessity.”

“As we confront the scars of the financial crisis and search for new sources of growth, we cannot waste women’s economic contributions,” he said.

Visiting Finland — a country whose political leadership is top-heavy with women — U.S. Vice President Joe Biden echoed the call, saying education of girls was the key to future global stability.

“The single most significant thing we can do in the 21st century to improve the prospect of peace and security is to educate more women,” Biden said, standing alongside Finnish President Tarja Halonen.

Biden praised gender equality in Finland, where the president, prime minister and opposition leader are all women.

In Greece, where the economic crisis has thrown disproportionately more women out of work, feminists staged a flash mob dubbed “Three Minutes Without Women” in a central square of Athens.

At the high end of the spectrum, in Norway — the first country in the world to force large companies to gender balance their boardrooms — officials said the quotas should be extended to more companies.

The feminisation of boardrooms “is going much too slowly,” said Trade and Industry Minister Trond Giske.

A Moroccan human rights group called for the kingdom to inscribe gender equality in the constitution.

The minimum age of marriage for women was raised to 18 from 15 in 2004 unless a judge grants special permission. Still, about 42,000 requests to marry minors were made in 2009, mostly in rural areas.

Cambodian women were unable to mark the day publicly, as authorities banned a rally amid growing concern about a crackdown on freedom of expression in the country. gazette