Rifi : We shouldn’t be afraid as long as we have people like Sfeir 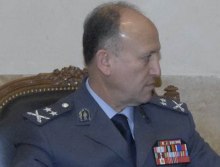 ISF chief General Ashraf Rifi told reporters after meting Patriarch Nasrallah Boutros Sfeir at Bkirki : As long as this country has men of Patriarch Sfeir’s caliber, we should not be afraid at all .

Rifi said the enrollment rate for Christians in the ISF has almost reached 40% for the first time in ISF’s history.

Sfeir with a a commemorative shield from the Internal Security Forces “in recognition and respect for the patriarch’s national stance , and for his sacrifices to the almighty God and the country ”

Addressing the Patrarch Rifi said: You have always been a good shepherd to the people who are craving for freedom, safety and dignity and the Lebanese will always be proud of great men like you”