Rebels won’t pursue Gadhafi if he quits within 72 hours 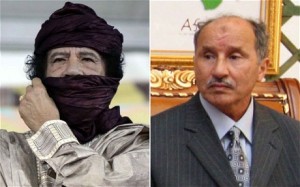 The head of the anti-government rebel body in Libya says it will not pursue Moammar Gadhafi for alleged crimes if he steps down as leader of the north African country within the next three days.

“If he leaves Libya immediately, during 72 hours, and stops the bombardment, we as Libyans will step back from pursuing him for crimes,” Mustafa Abdel Jalil, an ex-justice minister, told Al-Jazeera Television by telephone about 8:30 a.m. ET.

Abdel Jalil is the leader of the Libyan national council, the political voice of the rebels.

The CBC’s Nahlah Ayed reported the council had said it had “indirect” talks with Gadhafi representatives.

“Of course, as you might expect, Gadhafi officials have already said this is not true and they deny it,” she said Tuesday from the eastern rebel stronghold of Benghazi.

“Obviously the optics are not very good for loyalists. [Gadhafi] doesn’t want people to hear that.”

An adviser to Gadhafi’s deputy foreign minister told Reuters on Tuesday that reports that the government was newere “absolute nonsense.”

Al-Jazeera, quoting sources from the national council, reported that representatives from the Gadhafi camp had offered on Sunday to cede power if the leader would be exempted from prosecution and could keep his assets.

But that kind of deal doesn’t sit well with many of Benghazi’s citizens, said Ayed.

The rebellion against Gadhafi’s authoritarian regime began in mid-February in Benghazi, which has become the focal point of the uprising and the headqaurters of the national council.

“They just cannot imagine that after 42 years, with the kind of rule that he’s had here, he could simply walk away with any kind of money that they feel is theirs,” she said.

“Because just about everybody we’ve talked to has been touched by what they call the brutality of this regime.”

Throughout the 1970s and ’80s, Ghadafi was associated with various acts of terrorism. He was said to be a major financial backer of the Black September Movement (responsible for the attacks at the Munich Olympics in 1972 and infamously claimed responsibility for the 1986 Berlin discotheque bombing), and linked to the 1988 bombing of a Pan Am aircraft over Lockerbie, Scotland, and the 1989 bombing of a French aircraft over Niger.

Meanwhile, a witness said Gadhafi loyalists have recaptured Zawiyah, the city closest to Tripoli that had fallen into opposition hands after heavy shelling by tank artillery and mortars.

The witness, speaking to The Associated Press by phone, said Gadhafi’s tanks and fighting vehicles were roaming the city 50 kilometres west of Tripoli and firing randomly at homes.

The witness spoke on condition of anonymity because he feared reprisal.

On a separate front, Libyan warplanes launched at least five new airstrikes Tuesday near rebel positions in the eastern oil port of Ras Lanuf, keeping up a counteroffensive to prevent the opposition from advancing toward Gadhafi’s stronghold in Tripoli.

There was no immediate word on casualties, and an Associated Press reporter who witnessed the strikes said they did not appear to hit any fighters. The latest airstrike hit a two-store house in a residential area, causing some damage but not hurting anyone.

The increasing use of air power underlines the vulnerability of the rebel forces as they attempt to march in open terrain along the Mediterranean coast and could prompt world powers to impose a so-called no-fly zone over Libya to deny Gadhafi that edge.

NATO on Monday decided to boost surveillance flights over Libya as it continues to debate the utility of imposing the no-fly zone. CBC