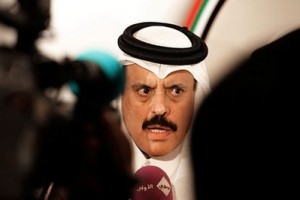 The Gulf Cooperation Council called on the United Nations Security Council Monday to approve a no fly zone over Libya in the interest of protecting its people against “crimes against humanity.”

In a press conference held after a meeting of Gulf foreign ministers in Abu Dhabi, Gulf Cooperation Council, or GCC, secretary general Abdul Rahman Al Attiyah called on the Security Council to “take sufficient measures to protect the people of Libya, including approving a no fly zone.”

Al Attiyah said in a speech to the meeting earlier Monday that the Libyan regime’s use of force constituted a “crime against humanity” but said the Gulf states rejected any foreign intervention in the North African country.

The United Arab Emirates also called on the UN Monday to protect the people of Libya. “We appeal to the international community, especially the Security Council, to meet its historical responsibility to protect this dear people,” said Foreign Minister Sheik Abdullah bin Zayed Al Nahyan. WSJ