Hariri: We will carry the Lebanese flag not arms 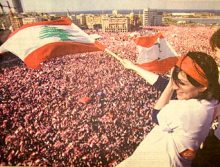 March 14 marks the 6th anniversary of the Cedar revolution when over 1 million Lebanese gathered in down Beirut to protest against the murder of the the late PM Rafik Hariri and called on Syrian troops to leave Lebanon. The Syrian troops withdrew in April 2005

Hariri said that the ceremony will take place on Sunday March 13 ( ( instead of March 14)) because “we are not disruptive people, it is not in the people’s or country’s interests [to disrupt a working day],” according to a statement released by Hariri’s office.

“March 14, 2005 was the day that brought the Special Tribunal for Lebanon that aims to find the truth,” Hariri said.

Jumblatt, Mikati and Safadi were all elected on March 14 electoral tickets during the 2009 parliamentary elections

Jumblatt told al-Anbaa newspaper on Monday: “The party (PSP) will not take part in the March 13 rally because it knows that the people are responsible enough to refuse to participate in an occasion where speeches will be aimed at inciting strife, hatred, and sectarianism.”