‘I get my legitimacy from you’ Egypt PM tells protesters 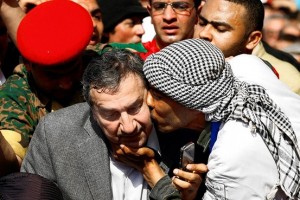 This past week, Egypt’s then-Prime Minister Ahmed Shafiq scolded a writer who challenged his policies during a debate. He resigned a day later under pressure from the country’s military leadership.

On Friday, his successor, Essam Sharaf, spent his first day on the job by walking into Tahrir Square and telling tens of thousands of protesters that he would carry out on their demands for democracy. If he didn’t, he said, he would be the first one to join them on the streets.

“I get my legitimacy from you, the people,” Mr. Sharaf told cheering crowds before being carried out triumphantly from the square on the shoulders of supporters. “You are the ones to whom legitimacy belongs.”

The conflicting styles between the two men signal a deep change in Egyptian politics thanks to the country’s revolution that toppled President Hosni Mubarak last month. Gone, for now, is an era of paternalistic and condescending politicians, replaced by a new, if still emerging, age of accountability.

Protest leaders argued that Mr. Shafiq, named by Mr. Mubarak in the dying days of his regime, wasn’t carrying out their remaining demands, such as releasing political prisoners and going after corrupt members of Mr. Mubarak’s government.

In the latest sign of change in the largest Arab country, the military said on Friday that it had set March 19 for a national referendum on constitutional changes that would loosen restrictions on running for president and create strict term limits in a region dominated by autocrats.

Mr. Sharaf, a U.S.-educated engineer, showed a deft political touch by turning up at Tahrir, the center of the protest movement. It was something neither Mr. Mubarak nor Mr. Shafiq dared to do.”Until now, the attitude among Egyptian leaders has been one of ‘I shouldn’t have to explain myself to you,’ ” said Alaa Al Aswany, one of Egypt’s leading novelists.

In fact, it was a confrontation on live television between Mr. Aswany and Mr. Shafiq on Wednesday night that underscored the sea change in Egypt’s political culture in recent weeks. The incident appears to have hastened Mr. Shafiq’s departure.

Mr. Shafiq was invited to appear on Egypt’s OTV channel. Unusually, the network also invited along several other guests, including Mr. Aswany and network owner Naguib Sawiris, Egypt’s richest man. The format was a first in modern Egyptian television: a debate between a top public official and critics.

Mr. Aswany and Mr. Shafiq promptly clashed on a range of issues, including comments by Mr. Shafiq during the uprising against Mr. Mubarak that Tahrir Square should be cleaned up and turned into an Egyptian version of London’s Hyde Park, where protesters could occasionally go and give speeches.

Mr. Aswany accused Mr. Shafiq of ignoring the more than 300 people who died in the protests and wanting to give out “sweets and chocolate.”

“Wanting the people to stay in a clean place is wrong?” Mr. Shafiq answered. “We should find out who killed them first,” answered Mr. Aswany.

“There are investigations,” Mr. Shafiq said. “It’s been a month, sir, where are the investigations? Not a single officer has been put on trial,” the writer demanded.

“So go and meet the attorney general, what are you arguing about?” said Mr. Shafiq, growing angry. “What does that have to do with living in a dump?”

After being pressed about those killed during the uprising, Mr. Shafiq grew increasingly angry. “Don’t put on that patriotism act. I’m more of a patriot than you are. I fought in the war and I killed and got killed, and I did everything.”

“It made clear why Mr. Shafiq couldn’t survive. He was not able to defend his rationale for being prime minister,” said Ibrahim Al Nour, a political-science professor at American University in Cairo.

Mr. Nour said Mr. Shafiq’s arguments amounted to telling people that he deserved to lead because he had served in the military. “Shafiq was using the same logic as Mubarak that no one is buying anymore.” Mr. Shafiq could not be reached for comment.

“What did Shafiq do to deserve being kicked out?” one banner read.

“The protesters tell us who we can and can’t have in our government,” said Amina Hassan, a 37-year-old stock market analyst.

Some of the protesters blamed Mr. Aswany for challenging Mr. Shafiq on television. Reflecting the deferential political culture that dominated Egypt until weeks ago, several protesters said Mr. Shafiq, like Mr. Mubarak, should have been allowed to serve out their terms and “not be humiliated.”

Photo: Egypt’s new Prime Minister-designate Essam Sharaf is greeted by supporters after a speech in Cairo.