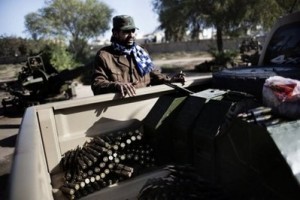 European Union leaders will hold a special summit on Libya and North Africa in Brussels on March 11, EU diplomats said on Tuesday.

Herman Van Rompuy, the president of the European Council, is in the process of calling leaders to finalise invitations and is expected to formally announce the date later on Tuesday.

The EU’s foreign policy chief, Catherine Ashton, is handling preparations for the meeting, which will deal with the humanitarian and political response to the situation in Libya, where the uprising against leader Muammar Gaddafi is closing in on the capital Tripoli. Reuters

Photo: Libyan soldiers who have defected to the anti-Kadhafi opposition load munitions in the eastern city of Benghazi. European Union leaders are to meet for an extraordinary summit on March 11 to seek a response to the crisis in Libya, and to turmoil in the Arab world, an EU diplomat has said