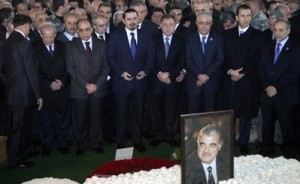 Caretaker Premier Saad Hariri justified the March 14 alliance’s refusal to be part of Najib Mikati’s government by stressing that the Hezbollah-backed Cabinet aims at “eliminating” the Special Tribunal for Lebanon.

March 14 “saw that it is in the interest of Lebanon and the Lebanese to move to a real national opposition that responds to the requirements of a democratic system,” Hariri said in the interview published Monday.

“They wanted us to become part of a government that seeks to eliminate the international tribunal from the policy statement,” Hariri told al-Mustaqbal daily about the March 8 forces.

The new opposition should “preserve the nation” against efforts to target the constitution and the Taef accord, he added.

When asked if the March 14 decision to become the new opposition was the start of a campaign for the 2013 parliamentary elections, Hariri said: “This issue is not linked to power. It is about essential things that effected public life.”

He said the next elections will be an opportunity for the Lebanese “to salvage the democratic system” from Hizbullah’s arms.

The March 14 alliance’s decision to not participate in the next cabinet was really made by the March 8 coalition, Environment Minister Mohammad Rahhal—who is a member of the Future Movement—told OTV on Monday.

March 8 made no serious offers to March 14 for the latter to join the cabinet, he added.

Mikati has yet to form a cabinet after the January collapse of Hariri’s unity government over a dispute over the Special Tribunal for Lebanon – investigating the 2005 murder of former PM Rafik Hariri – which will reportedly indict Hezbollah members.